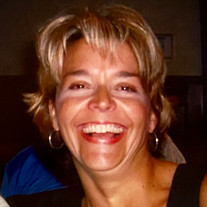 Wilma "Wink" Niden Barren, 63, of Worthington, OH passed away suddenly on Saturday, July 3, 2021 at Cape Cod Hospital with her loving family by her side. Wink was born on November 18, 1957 to the late George and Barbara Niden in Boston, MA. Wink grew up on Chautauqua Lake in Lakewood, NY where she was a lifeguard, avid water skier, and high school cheerleader and track athlete. She attended Southwestern Central High School where she met her high school sweetheart and husband of 40 years. Wink then attended UMass Amherst and graduated in 1980. Shortly thereafter, she married and began to dedicate her life to her family. Wink was truly selfless. For her, family was everything. She was most proud of being a mother and the biggest supporter and fan of her three kids not only in sports but also in life. She had an incredible spirit, infectious smile and laugh, and a way of making unique and meaningful connections with everyone she encountered. There were no strangers in her life, only friends. She maintained significant relationships with friends from all her stops in life: Lakewood, UMass, Princeton, Fort Ord and the Army, Worthington, Cincinnati, and Cape Cod. Most of all, she was kind to everyone she met and preached that kindness to her children. She was a tiny woman with a huge personality who can only be described as one of a kind. Along with Wink's parents, she is also preceded in death by her son Christopher J. Barren, brother-in-law Mark P. Barren, and father-in-law Daniel J. Barren. Wink's survivors include her loving husband of 40 years, Mike Barren of Worthington; daughter, Christine; sons, Nick (Jessie) and Pat (Melinda); grandson, Henry; mother-in-law, Catherine Barren of Worthington; siblings, George (Susan) Niden of MA, Martha (John) Coleman of MA, Lucy (Tony) Ham of MT; brothers-in-law, John (Jana) Barren of Gahanna, Brian (Kris) Barren of Cleveland; sisters-in-law, Mary Lee (Barry) Sprung of Worthington, Anne Barren of Gahanna, and Jennifer (Marty) Thompson of New Albany. She is also survived by her nieces and nephews, George, Sarah, Kelsey, Kate, Cody, Sarah, Danny, Katie, John, Billy, Brad, Jamie, David, Andrew, Maggie, and Caroline. The Barren Family invites all Friends and Family of Wink Barren to a Celebration of Life at York Golf Club, 7459 N. High Street, Columbus, OH (just North of 270 on 23) from 12:00pm to 4:00pm on Thursday, July 15, 2021. In lieu of flowers, please consider a donation to Recreation Unlimited at:

Wilma "Wink" Niden Barren, 63, of Worthington, OH passed away suddenly on Saturday, July 3, 2021 at Cape Cod Hospital with her loving family by her side. Wink was born on November 18, 1957 to the late George and Barbara Niden in Boston, MA.... View Obituary & Service Information

The family of Wilma "Wink" Barren created this Life Tributes page to make it easy to share your memories.

Send flowers to the Barren family.