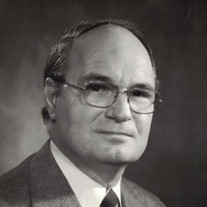 Mr. Willis S. “Pete” White, Jr., age 94 of Columbus, OH passed away July 4, 2021 in Murfreesboro, TN. He was born in the Deep Creek community in Chesapeake, VA to the late Willis S. White, Sr. and Carrie Culpepper White. Mr. White proudly served his country in the United States Navy during World War II. He then graduated from Virginia Polytechnic Institute with a degree in electrical engineering, the first in his family to attend college. He later earned a Master’s degree in industrial management as a Sloan Fellow at the Massachusetts Institute of Technology. He was awarded an honorary doctorate in business administration by Indiana University later in his career. He joined American Electric Power in 1948 as an Assistant Engineer and except for a short period serving the Defense Electric Power Administration during the Korean War, spent his entire career at AEP. Known universally as Pete White throughout his career, he rose steadily in management, serving in New York, Virginia, and Ohio. In 1976 he became the seventh CEO and Chairman of the Board of AEP and served until his retirement in 1991. In 1980 he moved the headquarters of AEP from New York City to Columbus to be more central to the AEP system. He also served as the first American chairman of CIGRE’ (the International Conference on Large High-Voltage Electric Systems, headquartered in Paris), a Director of several companies and organizations including the Bank of New York Mellon, Irving Trust Company, the Edison Electric Institute, the National Association of Manufacturers, and as a Chairman of the Board of Trustees of Battelle Memorial Institute. He was appointed by President George H. W. Bush as a private-sector representative to the U.S. Presidential Economic Delegation to Poland. A devout Christian, Mr. White dedicated much of his life to public service and charitable causes. While residing in Virginia, he was president of the Lynchburg Chamber of Commerce, as well as president of the Blue Ridge Council of the Boy Scouts of America. In Ohio, he was a Campaign Chairman for the United Way of Franklin County, a Chairman of the Greater Columbus Convention Center Board of Trustees, a trustee of Children’s Hospital, an Emeritus Trustee of Riverside Methodist Hospital, a board member of the Columbus Area Chamber of Commerce, and a board member of Ohio Health as well as serving on Ohio Health’s Quality of Care Committee. Mr. White was also a board member of the Ohio Methodist Theological Seminary. He was a firm believer in the importance of education and served on the Board of Visitors at Virginia Tech including service as Vice-Rector and Rector. He also served as a Director of the Virginia Tech Foundation, and as a trustee of Randolph-Macon Woman’s College in Lynchburg. From Virginia Tech, he received the University’s Distinguished Alumni Award, the Ruffner Medal for service, and the College of Engineering’s Distinguished Service Award. The College of Engineering’s Chair for Innovation in Engineering Education is named in his honor. He was a member of the Institute of Electrical and Electronics Engineers, Eta Kappa Nu, and the National Academy of Engineering. Mr. White was an enthusiastic amateur musician. He had a beautiful baritone voice and as a young man sang in the AEP choir in New York and several church choirs. He also played trombone and piano. While at Virginia Tech, he was a member of the famed Highty Tighties precision marching band. He was a strong financial supporter of the Roanoke VA Symphony, the Columbus Symphony and Opera Columbus. Mr. White is survived by his wife Adele McComas White and her children Cathleen McComas and Patrick McComas of Columbus, his brother Norman T. White of Chesapeake, VA, his children Willis S. White, III, of Jacksonville, FL, Marguerite W. Spangler and her husband Dr. Pat W. Spangler of Murfreesboro, TN, and Cynthia White-Haight of Ponte Vedra, FL; as well as grandchildren Dr. M. Lee Spangler, II of Waterford, VA, Nicholas W. Spangler of Brentwood, TN, Alexander J. Haight and Charles Z. Haight of Kent, OH and two great grandchildren, Owen and Collins Spangler. In addition to his parents, he was preceded in death by his first wife of 48 years, LaVerne B. White and his sister Doris White Jones. A visitation will be held from 5-7 PM on August 6 at SCHOEDINGER NORTHWEST and a memorial service will be held at 11 AM on August 7 at Trinity United Methodist Church. In lieu of flowers, donations in his memory may be made to Kobacker House Hospice, Trinity United Methodist Church in Columbus, OH, and Alive Hospice in Murfreesboro, TN.

The family of Willis S. "Pete" White Jr. created this Life Tributes page to make it easy to share your memories.

Send flowers to the White family.