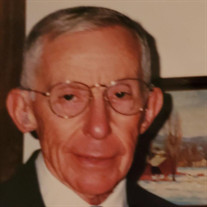 William Musser (Bill), of Columbus, passed away peacefully on November 24, 2020. He was born on November 16, 1927 to the late John and Mary (Brady) Musser. He attended Macomber Vocational Technical High School in Toledo where he learned electricity and also was a cheerleader. After High School, he entered the Army where he served after World War II from 1946 to 1947, spending a year in Japan. He met the love of his life, Joan, at the Eddie Hanf Dance Studio in Toledo. After 3 years of dating, they married in 1952. They enjoyed dancing, going to Cedar Point and spending time at the cottage at Bird Lake near Hillsdale MI. He is survived by his wife of 68 years, Joan, daughters, Karen Dawes (Ray) and Betty Cox (David), Grandchildren, Renee Matney (Greg) and Lauren and Joel Saltzman along with great grandchildren, nieces and nephews. He began his career with Ohio Bell Telephone during high school as a Central Office Repairman in Toledo. He moved to Columbus in 1963 as a Project Engineer. He retired in 1986 from Ameritech with 42 years of service. After retirement, he and Joan wintered in FL. Bill discovered his life passion of bicycling in the early 70's and continued riding until he stopped around age 87. He rode numerous TOSRV rides, Fall Challenges, commuted to work, long distance touring rides such as from OH to FL and back, many rides with his friends in the "Veterans" bicycle group. He amassed over 400,000 lifetime miles. Bill enjoyed "all foods" along with a cold beer or glass of wine. He had a sweet tooth and always asked "what's for dessert?" He had a dry sense of humor that brings a smile to many. He loved to read books and the daily newspaper. He also took numerous pictures of family and friends throughout the years, leaving many treasured photo albums. Although he had a long wonderful life, he will be greatly missed by his family and many friends. A celebration of life will be held in 2021 when it will be safer for everyone to be together. Special thanks to Westerville Senior Living team members and to all of the kind Doctors and Nurses at St Ann's Hospital who cared for him recently.

William Musser (Bill), of Columbus, passed away peacefully on November 24, 2020. He was born on November 16, 1927 to the late John and Mary (Brady) Musser. He attended Macomber Vocational Technical High School in Toledo where he learned electricity... View Obituary & Service Information

The family of William Musser created this Life Tributes page to make it easy to share your memories.

William Musser (Bill), of Columbus, passed away peacefully on...