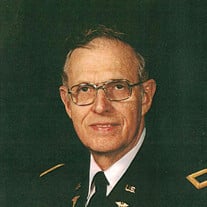 William Barton Merryman, MD (Bill), son, brother, spouse, father, father-in-law, grandfather, great grandfather, and to many in the community, OB GYN, passed peacefully on Dec. 27, 2020 at the age of 97. "Bart," the family name for Bill, is remembered for his love of camping trips, annual fall visits to Lake Hope State Park, skiing in Canada and Vail, Colorado (into his 80s), lobster boils and fish fries and Friday night dance sessions at home to Guy Lombardo and other great Big Band artists. He was a fan of Gloria's cooking and his children and grandchildren remember him for numerous sayings including "Gloria, you've done it again - 5 stars!" which became a goal for all of his family to achieve. He enjoyed music - he played baritone as a member of The Ohio State University Marching Band and OSU Alumni Band, and was an accomplished pianist. Bill was generous and humble, and modeled hard work and family time for his children and grandchildren. A life-long resident of Columbus, and graduate of North High School (1941), Bill enrolled in The Ohio State University just before the United States entered WWII. He joined the Army Reserves as a private while remaining a student and was then accepted to The OSU College of Medicine, from where he graduated in 1947 and completed an internship at Kings County Hospital, Brooklyn, NY. Dr. Merryman remained in the Army Reserves following the war and elected to go on active duty. He was stationed two years post-war as an Army Medical Officer in Germany where he met his future wife, Gloria Good. Dr. Merryman served in the US Army Reserves Medical Corps for 35 years, retiring as a Brigadier General in 1983. As a trained Obstetrician Gynecologist (residency at OSU), Dr. Merryman established a medical practice in Columbus in 1955 until his retirement in 1993 and served on medical staffs at OhioHealth Riverside Methodist Hospital and University Hospitals where he was a role model for lifelong learning and medical education. In the 1960s he was a leading advocate of allowing spouses into the delivery room. Over the course of his career, he cared for thousands of women and their babies and enjoyed teaching students and residents. Dr. Merryman is preceded in death by his parents James H and Ethel, his wife of 66 years, Gloria, and sister Virginia Schlitt (John). He is survived by his sister Joyce; children, Scott (Susan), Suzanne (Barry Ferguson), Bill (Patti); grandchildren Kristin, Kimberly, Connor (Betsy), Kyle, Kathryn (Jason Replogle), Walter, Spencer, Taylor, Natalie, Michael; daughter-in-law Vicki Spencer; and great grandchild Hannah. The family thanks Whetstone Care Center and Bella Care for the excellent care and compassion they provided. While there will be no services, if you wish to do something in remembrance of Bill Merryman, hug your children and grandchildren. If you wish to do something further, consider a donation to the OhioHealth Foundation Women's Center Riverside Methodist Hospital Fund or Ohio Pug Rescue where Bill and Gloria rescued numerous pugs over the years. Donations can be made in honor of Dr. Merryman by mailing a check to: Send a check to: OhioHealth Foundation 3430 OhioHealth Parkway Columbus, Ohio 43202 Women's Center RMH Fund, honoring Dr. Merryman Or donate online to: Ohio Pug Rescue,

William Barton Merryman, MD (Bill), son, brother, spouse, father, father-in-law, grandfather, great grandfather, and to many in the community, OB GYN, passed peacefully on Dec. 27, 2020 at the age of 97. "Bart," the family name for Bill, is... View Obituary & Service Information

The family of William B Merryman created this Life Tributes page to make it easy to share your memories.

Send flowers to the Merryman family.