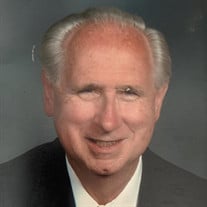 I am the way the truth and the light, for he who believes in me will surely have eternal life. William (Bill) Lingo passed peacefully Wednesday morning, December 8, 2021 after a lengthy battle with dementia. Bill was a life- long resident of Upper Arlington and a founding member of Holy Trinity Lutheran Church. A graduate of Upper Arlington High School, class of 1949, he went on to serve our Country in the Korean War and was honorably discharged in 1955. Bill attended The Ohio State University, joining the Phi Psi Fraternity where he made many good friends, prior to joining the Army. Once discharged, he graduated with a degree in Business from Bliss College and became a top producing Insurance Agent until his retirement in 2012. Bill was extremely active in his church serving on Church Council, recruiting and leading the team of Ushers, and heading up the Saturday Night Adult Fellowship (SNAF) for more than a decade. He faithfully attended church, as well as Sunday School and Men’s Bible Study. Bill was a devoted football fan, attending both Upper Arlington High School games and O.S.U. football as often as possible. Bill Married Valerie Johnson in 1958 and they settled in Upper Arlington. They had two children, Erika (Lingo) Kerins (currently in Louisville, Kentucky) and Stephen Lingo M.D. (currently in Charlotte, North Carolina). After Valerie passed away, Bill met Pauline Stamm and the two were married in 1996, continuing to reside in Upper Arlington. Bill is preceded in death by his parents George and Christine Lingo, brother George Lingo, sisters MaryAnn Robertson, Grace Lutz and stepdaughter, Lee Brinker. He is survived by his loving wife Pauline, sisters Ruth Youngquist and Jean Frost. In addition to his children, Stephen and Erika (Dave), he is loved and adored by his 7 grandchildren and 3 great grandchildren. Daniel Kahler (Nicole) children Scott and Charlotte Kahler, Christopher Kahler, Meredith Daniels (Andrew) and Allyson Fahy and son, Eli Wilson, Virginia Jaques (Ben), Grace Lingo and Gretchen Lingo. Pauline’s children, Mark Burdette, Chel Hensor, and Paul Stamm, her granddaughter, Nicole Smith and great grandchildren, Sydney, Ethan, and Ryan Smith. In lieu of flowers, the family asks that donations be made to Holy Trinity Lutheran Church and Hospice of Central Ohio. Funeral Service will be held at 1:30 PM on Tuesday, December 21, 2021 at Holy Trinity Lutheran Church, 2001 Northwest Boulevard, Columbus, Ohio 43212, where family will receive friends from 12 until time of service at 1:30 PM. Interment at Union Cemetery.

I am the way the truth and the light, for he who believes in me will surely have eternal life. William (Bill) Lingo passed peacefully Wednesday morning, December 8, 2021 after a lengthy battle with dementia. Bill was a life- long resident... View Obituary & Service Information

The family of William Earl Lingo created this Life Tributes page to make it easy to share your memories.

I am the way the truth and the light, for he who believes in...

Send flowers to the Lingo family.