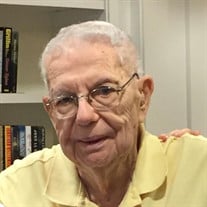 William Harsch Hylton, age 90, passed away Saturday, October 3, 2020. He was born on June 2, 1930 in Columbus, Ohio to the late Walter and Helen Hylton. Bill was a 1948 graduate of Harding High School in Marion, Ohio. He served in the United States Army, where he shared his love for the arts by being assigned the film librarian. The majority of his career was with the Columbus Police Department where he retired as a civil employee and made many friends. He also worked as an office manager for Hilltop Van and Storage for 20 years. In his spare time, Bill enjoyed reading, films and theater, card games, being outdoors, and trivia. He was a film enthusiast and especially loved older films. At First Community Village, he shared his passion for books and films and was endearingly known as "the Movie Man" hosting weekly gatherings for the residents. He also enjoyed going on day trips and mystery trips with the Senior Center. Bill was known for being a devoted and loving father, uncle, and grandfather. He took his family and grandchildren on endless adventures and made many memories. In addition to his parents, Bill was preceded in death by his sister, Virginia Burdge. He is survived by his former wife, Joanne Hylton; children, Elizabeth (Ron Miller) Hylton, Mark Hylton and Sarah (Tony) Palka; beloved nieces, Cynthia (Gene) Aloise and Kimberly (Dave) Cheezum; grandchildren, Ashley (Tommy) Forster and Andrea Palka; greatgrandchildren, Josie, Joshua and Rosanne; special friend, Theresa; great nieces and nephews; and many friends and neighbors at First Community Village. Family will receive friends from 4-7 PM on Tuesday, October 6, 2020 at SCHOEDINGER NORTHWEST CHAPEL, 1740 Zollinger Road, Upper Arlington, Ohio 43221. Guests are respectfully asked to wear masks and attendance will be monitored to ensure safety for everyone attending. A private funeral service will be held for the family on Wednesday, October 7, 2020. Interment at Green Lawn Cemetery. The family would like to send a special thank you to the Mount Carmel Hospital Systems, the staff at First Community Village, especially Pastor Gerald Murphy and Sonia, and the staff at Tremont Pharmacy. Memorial contributions may be made to the Mount Carmel Foundation, or to CAPA, Columbus Association of Performing Arts, https://www.capa.com/support-us/donate. A webcast of the private funeral service will be available on schoedinger.com

William Harsch Hylton, age 90, passed away Saturday, October 3, 2020. He was born on June 2, 1930 in Columbus, Ohio to the late Walter and Helen Hylton. Bill was a 1948 graduate of Harding High School in Marion, Ohio. He served in the United... View Obituary & Service Information

The family of William "Bill" Hylton created this Life Tributes page to make it easy to share your memories.

Send flowers to the Hylton family.