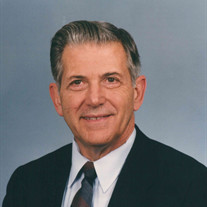 William Robert Hague of Gahanna, Ohio was born on November 3, 1932 in Kennonsburg, Ohio passed away on September 11, 2020. He is survived by his loving wife of 68 years, Joyce; sons Robert (Andrea) Hague of Silver City, NM, Jeff (Ruth) Hague of Cape Coral, FL and David (Tammy) Hague of Pickerington, OH; six grandchildren Jason Hague, Nick (Mandy) Hague, Lauren (Jeff) Hauser, Will (Nicole) Hague, Alex Hague and Travis (Kaleigh) Hague; eleven great grandchildren William, Ashton, Grady, Chase, Colby, Samantha, Natalie, Penelope, Milo, Julian and Ruby. He is also survived by many extended family and friends. Bill was drafted into the US Army and served his country during the Korean Conflict. In 1955 he sold Kirby vacuum cleaners door-to-door and from that experience he founded Hague Water Conditioning in 1965. In 1982 his company began manufacturing water treatment equipment at 4343 South Hamilton Road under the name of Hague Quality Water International. His company has become one of the most successful and highly regarded water conditioning companies in the world. The company now ships products to all 50 states as well as more than 24 countries. Hague Quality Water International operates as a tribute to the American Dream…a thriving company built on hard work, innovation and the refusal of one man, supported by family, to never accept the statement, "it can't be done". Working through the Columbus Dog Connection, Bill and his wife, Joyce were instrumental in initiating the Spay/Neuter Ohio Project and was an advocate for homeless, abused, and neglected dogs and cats in Ohio. He will be remembered for his tireless work ethic in everything he did and will be greatly missed by all who knew or worked for him. Bill's family will have a private memorial service to celebrate his life at SCHOEDINGER NORTHEAST. In lieu of flowers contributions may be made to the Columbus Dog Connection, 2761 Johnstown Rd, Columbus, OH 43219 or www.columbusdogconnection.com.

The family of William Hague created this Life Tributes page to make it easy to share your memories.

William Robert Hague of Gahanna, Ohio was born on November 3,...

Send flowers to the Hague family.