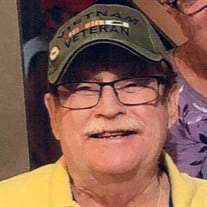 William (Bill) N. Edwards, of Columbus, Ohio passed away suddenly on January 8th, 2022. Bill was born in New Haven, CT on April 10, 1946. He graduated from Roger Ludlowe high school in Fairfield, CT in 1964 and continued his education at South Connecticut University where he received a bachelors degree in biology and was a member of ROTC. Bill was a proud Vietnam Veteran and served the US Army from 1968-1973 as a helicopter pilot and Captain. He earned several medals for his service and heroism during the war. Bill went on to work for Electronic Data Systems for 35 years until he retired in 2009. Bill loved spending time coaching, playing softball, and cheering for his girls no matter the occasion. He loved boating and was always up for tossing someone off "his tube". He had a love for war movies and books, James Bond, helicopters, crossword puzzles, Jeopardy, diet pop and sweets (he would tell you he never met a cookie he didn't like). He played the bagpipes and was extremely proud of his Scottish heritage. Bill was honored to be on the board of directors for the Ohio Military Hall of Fame and served as secretary for many years. Most of all, Bill loved his family. He was a devoted, loving husband, a wonderful father and hero to his 3 daughters and the best Pop Pop his 5 grandchildren could ever ask for. He was so proud of his family! He is preceded in death by his parents Frank and Catherine (Barron) Edwards and niece Lilly Edwards. He is survived by his loving wife Patricia of 48 years; His daughters Katie(Derek) Landfair, Kristin(to be determined) Edwards, and Karolyn (Zack) Houser; His grandchildren, Tommy, Derek, Kensley, Everett and Hattie; His brother Ian(Beth) Edwards and his nephews Graham and Duncan as well as many more extended family members, friends and loved ones. Calling hours will be Friday, January 14th from 2p-4p at Schoedinger East, 5360 E. Livingston Ave. Columbus, OH 43232 with a service immediately following. In lieu of flowers, we ask that donations be made to the Ohio Military Hall of Fame in Bill's name. Ohio Military Hall Of Fame c/o James Garvey, Treasurer, 4840 Patricia Lane Westerville, OH 43082-8810

William (Bill) N. Edwards, of Columbus, Ohio passed away suddenly on January 8th, 2022. Bill was born in New Haven, CT on April 10, 1946. He graduated from Roger Ludlowe high school in Fairfield, CT in 1964 and continued his education at South... View Obituary & Service Information

The family of William "Bill" N. Edwards created this Life Tributes page to make it easy to share your memories.

Send flowers to the Edwards family.