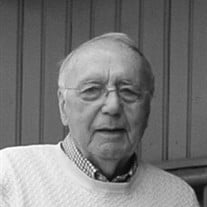 William "Bill" W. Corbitt passed on January 28, 2021 at Wesley Woods at New Albany, New Albany, OH. He was 97 years old. Bill was born in Ashtabula, Ohio on February 7, 1923 to Everett and Agnes (Putt) Corbitt. He loved two things from an early age: sports and, a little later, writing. After attending his first pro baseball game with his dad, at the age of six, Bill became a die-hard Cleveland Indians fan. His love for sports, both as a participant and fan, started then and continued his whole life. As Managing editor of his Ashtabula High school newspaper, he was awarded the national prize for sports writing from the National Scholastic Press Association; as a result, he was recruited as sports editor of the Conneaut New-Herald, just two days after graduation. At the time, he was believed to be Ohio's youngest editor of a daily newspaper, at 18. Bill was saving funds to study journalism at The Ohio State University, but soon after the attack on Pearl Harbor, he enlisted in the Army. During WWII, Bill served three years in the Pacific Theater. He served as Staff sergeant and chief clerk, Information-Education Section, headquarters, United States Eighth Army. He was Founding Editor of the Eighth Army's daily newspaper, The Octagram, published from a jungle tent. In 1945, Legendary composer Irving Berlin borrowed Bill's "office" to write a song, "Heaven Watch the Philippines" -- which was dedicated that evening to Gen. Douglas MacArthur in commemoration of the liberation of the Philippines. (You can find it on YouTube.) Seven weeks after being discharged from the Army, Bill married Dolly Parker of Conneaut, on Valentine's Day, 1946. Seventy-five years ago. He returned to the News-Herald as City editor. That gave him the opportunity to watch and report on his Indians clinching the World Series, from the Braves, in 1948. His biggest investigative story was the identification of Conneaut resident Mildred Gillars as Germany's "Axis Sally" of WWII. (Google that, too.) In 1948, Bill was recruited to Ohio Power in Canton, Ohio (Part of the American Electric Power System) where he was Founding Editor of AEP's first employee publication, The Ohio Power Review. While in Canton, their son John was born. The birth announcement was a miniaturized version of the Review. In 1952, Bill was transferred to AEP's headquarters in New York City. Bill and Dolly settled in Summit, New Jersey, where he later became a charter member of the Jaycees. He continued his lifetime love of sports by joining a local softball team, bowling leagues, golf excursions and more. Bill and Dolly enjoyed their years in the New York area, taking advantage of all it offered, including the Jersey shore, pro games, and particularly Broadway theater. At AEP, he wrote and produced 36 annual reports for which he won 75 national awards. He authored two books, "When Men and Mountains Meet" and "And There Was Light." Among his myriad job responsibilities, Bill also instructed courses in media relations for 24 years at the University of Michigan (despite being a huge fan of arch rival Ohio State) and Georgia Tech. Always civic-minded, Bill was a two-term member of the Summit Board of Recreation, where he lobbied successfully to build both a municipal golf course and swimming pool, during his years as President. Despite strong opposition by many who feared tax hikes, and worse, he was not deterred. He devised and promoted a plan to make both facilities self-sufficient, and they are both extremely popular, and affordable, to this day. "Nevertheless [he] persisted." AEP moved their headquarters to Columbus in 1980 and Bill and Dolly settled in Worthington Hills (Perry Twp.). They became active volunteers with Columbus' Homeless Families Foundation, sponsoring a family. They enjoyed - and supported - local pursuits, particularly The Broadway Series and Symphony Pops. In his sixties, Bill played softball with the Worthington Dinosaurs. They belonged to the Methodist churches in every city along the way. They were members of the Worthington Hills Country Club for many years. And, In 1989, after 41 years working in Public Affairs, Bill retired from AEP as Vice President - Communications. From 1941 until 1989, Bill never went on a traditional job interview. His reputation as an intrepid journalist preceded him, and he rose in his career by process of word of mouth. Prior to retirement, Bill and Dolly liked to travel, particularly yearly trips to the Caribbean, and also Europe and throughout North America. In retirement, they were "snowbirds" to Manasota Key, Englewood, Florida. In his later years, William was proud to be recognized by Honor Flight Columbus -- as a charter member of the WWII Memorial in Washington, DC, it was a highlight of his life. Until age 89, Bill tried to break 100 on Columbus and Englewood area golf courses. He continued to write periodic newsletters for various organizations, along with occasional feature articles for his hometown Ashtabula Star-Beacon, until age 93. Bill is predeceased by his parents, Everett and Agnes Corbitt, a sister Jeanne Corbitt Earls, and an infant sister, Judith Corbitt. Bill is survived by his beloved wife of nearly 75 years, Dolly (Parker) Corbitt, son John Corbitt (Ken Stikeleather), beloved niece Judith Lilley (Douglas), and many other nieces and nephews. A special thanks to Marcia Strall, PCM / Elder Life Solutions LLC, along with the staff at Ohio Living Westminster-Thurber, Wesley Woods at New Albany and Wesley Hospice. Bill was a man of impeccable honesty and integrity, empathy, thoughtfulness and determination. "There's no such thing as a free lunch," was perhaps his favorite saying. A fine man, a true gentleman, an active citizen; above all a deeply devoted husband, the best father / uncle / father-in-law / friend. We love you more than we can express. William's family will celebrate his life at a later time, when deemed safe and appropriate. Please consider a donation in William's memory to one of the following: The American Heart Association (http://bit.ly/3agZEPQ) Alzheimer's Association (http://bit.ly/3cDafHJ) Homeless Families Foundation (http://bit.ly/3cDarqr) CAPA (Columbus Association of the Performing Arts) (http://bit.ly/2MILwGE)

The family of William W. Corbitt created this Life Tributes page to make it easy to share your memories.