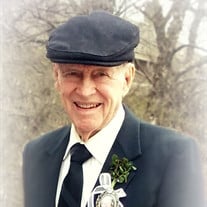 William Richard Brown (June 19, 1929 - October 11, 2020) was the son of Harry H. and Carrie L. Brown, Seiling, Oklahoma, preceded in death by his parents, two brothers, Harry E. and McLain R. of Seiling, Oklahoma, grandson Ryan and his beloved wife of 66 years, Glenna Darlene (Newman) Brown. He is survived by his children, Alison (Don), Sharon (Tom), Carol (Mark), Patricia; his sister, Dorcas (Gerald); his grandchildren, Jason (Sarah), Alissa (Zach), Ashley, David, Vanessa (Chris), Michael (Mehorin), Jordyn (Ryan), Corey; 6 great-grandchildren and 3 on the way. William (Bill) married Darlene Newman in 1951 and together they raised four daughters. Bill completed his undergraduate degree at Phillips University, Enid, Oklahoma, his Master's Degree at Oklahoma State University and his PhD at The University of Oklahoma. In 1970, Bill moved his family to Ohio joining the faculty at The Ohio State University as professor and served as a Chairman of the Communication Department. He received numerous awards including The Ohio State University Alumni Award for Distinguished Teaching. After retiring from OSU, where he remained Professor Emeritus, Bill accepted a professorship at Dartmouth College for several years. A published author, including "Imagemaker: Will Rogers and The American Dream" Bill was a communication theorist who developed the communication model, The Rhetoric of Social Intervention (RSI). Along with his wife, Bill was a faithful and active member of United Methodist and Disciples of Christ congregations, he was an Elder Emeritus in the East Mesa Disciples of Christ Church, located in Arizona, where he enjoyed their winter home and was an Elder at Karl Road Christian Church in Columbus. Raised in Northwest Oklahoma, Bill grew up with a solid sense of community and love of family. His values were shaped by the challenges of growing-up in a small town during The Great Depression and WW II where his parents helped others by feeding and housing those in need. He shouldered the work of the family farm following the death of his father and continued to preserve the land. Bill always said that his greatest achievement was his family and the Brown Family Motto is "You've got backing." Together Bill and Darlene provided a foundation of love, acceptance, security, understanding, and empathy instilled in their children and grandchildren. Bill was a lover of nature, dancing, music (having played Trombone in a dance band), and most of all he loved to converse with others. He was a life long learner with a yearning for knowledge of every kind. He possessed the unique ability through his story telling to bring history to life. His was a life well lived and in the words of Will Rogers, "So let's be honest with ourselves and not take ourselves too serious, and never condemn the other fellow for doing what we are doing every day, only in a different way." This webcast will take place on Thursday, October 15, 2020 at 9:55 AM. Watch webcast for William Brown: https://webcasts.lifetributes.com/1095642

The family of William Brown created this Life Tributes page to make it easy to share your memories.

Send flowers to the Brown family.