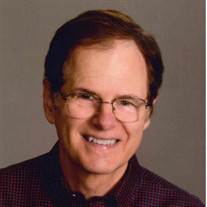 William “Bill” Edward Collins, Jr. Ph.D, age 72, passed away on December 26, 2020. He was born on November 16, 1948, in Millen, Georgia, to William Edward Collins Sr. and Francis Newton Collins, who preceded him in death. He is survived by his wife of 37 years, Janet Collins; his sister Patricia Calhoun (Roy) of Abbeville SC; his mother-in-law Helen Lucile Ford of Westerville OH; brothers in law Ted (Judy) Ford of Westerville OH, and Mark (Cindy) Ford of Middletown MD; eight nieces and nephews; and seven great nieces and nephews. He is also missed by his close friends Tom and Leslie Blincoe of Worthington OH; Ron and Gail McDermott of Westerville OH; and Steve and Marsha Morgan of Westerville OH. Although born in Georgia, Bill rarely mentioned his years there other than to say, by way of explanation when his nose ran in cold weather, “Hey, I’m a Georgia boy!” His grade school years were spent in Anderson South Carolina, where he developed a love for music and stereo equipment, thanks to the influence of his mother’s brother “Uncle Gary.” At the age of 8 he built his first stereo component from a mail order kit. With this love of building and modifying stereo components, he was drawn to the field of electronics. After high school, he pursued a degree in electronics only to discover that he “really didn’t like all that math.” He then pursued a communication degree which was perfect for his later career as a chaplain and clinical psychologist. During the late 1960s Bill was drafted to serve in the Vietnam War. At that time, he was a practicing Buddhist which teaches that one should not be the aggressor but must try their best to avoid any kind of violent act. Because of his religious beliefs, he was granted Conscientious Objector status and served his time as an orderly at a hospital in Atlanta GA. It was thru this experience that he felt a calling to pursue a helping profession. He was invited by a coworker to attend a Youth for Christ evangelistic series. He accepted Christ as his Savior, and with the encouragement and mentoring of his pastor in Atlanta, he chose to attend seminary at Andrews University in Michigan. While earning his Master of Divinity degree, he also took courses in Chaplaincy (CPE) and decided that this was truly the type ministry he wanted to pursue. In 1982 He was accepted into the Chaplaincy Residency at Kettering Memorial Hospital in Kettering OH. Being new to the Kettering community, co-workers invited him to a surprise birthday party. He did not know that he was “the birthday present” for the young lady whose birthday it was!! Things clicked and less than a year later, Bill and Janet married in September 1983. She still thanks her best friend Vinita for inviting Bill to her birthday party. After completion of his chaplain residency, Bill joined Harding Hospital in Worthington, OH, as a mental health chaplain. During his 7 plus years at Harding Hospital, he became an art therapist and served as the editor of the Harding Hospital Journal of Religion and Psychiatry. Bill’s work at Harding sparked his interest in pursuing a Ph.D. in psychology. After receiving his doctorate, he became a licensed psychologist and opened his own practice in Worthington OH. Bill’s practice focused on providing individual and couple therapy, business coaching, and ADHD assessment. He truly enjoyed working with clients and seeing the positive changes they could make in their lives. It was not uncommon for him to pray or read scriptures with his client if they requested it. In 2015, life took a different turn when, at the age of 66, Bill was diagnosed with early stage Alzheimer’s. He closed his practice, stopped driving, and relied more on Janet’s assistance. He never gave up his love for music, singing in the church choir, art, or his love for God. He loved being “Uncle Bill” to the many little ones in not only his extended family but friends’ children, too. Bill’s family would like to extend a special Thank You to Miprescious, Darlene and Pam, the three caregivers that gave Bill and Janet so much love and support over the last 9 months. Also a special Thank You to National Church Residences Hospice. Their constant support was so appreciated. While the road has been bumpy at times, Bill has held on to the belief that God’s hand has led and protected him. Those that have known and loved him are thankful he is now at rest in our Savior Jesus Christ. “Oh give thanks to the Lord, for He is good and his loving kindness is forever.” Psalm 107:1 **Contributions in memory of Bill may be made to National Church Residences, 2335 North Bank Drive, Columbus, Ohio 43220 or at www.NationalChurchResidences.org

The family of William "Bill" Edward Collins Jr., Ph.D. created this Life Tributes page to make it easy to share your memories.

Send flowers to the Collins family.