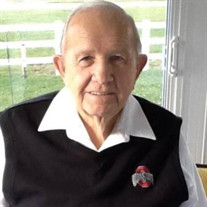 William Harold Bandy passed away peacefully at home on Wednesday, February 10, 2021 at the age of 91. Bill, as he was known by his family and friends, was born on the Bandy farm at the foot of the Wichita Mountains in Indiahoma, Oklahoma on September 20, 1929. There he helped his parents operate a dairy, plant/harvest cotton and wheat with horse-drawn implements, and raise beef cattle. They say that dynamite comes in small packages, and this was truly Bill, as he was short in stature, but strong and full of energy. After graduation, Bill enlisted in the US Air Force, serving six years overseas during the Korean war. Following his service, he took a job for the military aircraft manufacturer, General Dynamics, in Fort Worth, Texas. It was there he met Carolyn Coble and in 1964 they were married. Each had children from their first marriages, so they became a family of five and attended the First Baptist Church of Colleyville, Texas. In the early 70s, Bill accepted a sales opportunity offered to by Belding Hemmingway. He quickly became the highest performing salesman in his new role, and in 1975 was promoted to oversee the Central Region sales force, which brought his family to Central Ohio. Once retired, at the age of 75, Bill was able to spend many years with his loving wife, Carolyn, until her passing of cancer in 2009. He continued as an active member of the First Baptist Church in Gahanna, Ohio where they attended. There he met Sandy Wanner. They were married in 2012 and spent the past nine years active in Christian service and traveling the States and abroad. Bill is survived by his wife, Sandra (Sandy) Wanner of Blacklick, Ohio; his sister Colleen (Junior) Fischer of Chattanooga Oklahoma; daughter Janet Heavin of Indiahoma, Oklahoma; step-son, Drex (Bethany) Baker of Granbury, Texas; step-son, Barry (Susan) Baker of Marysville, Ohio; grandchildren, Cody Friedel and Chelsea (Heavin) Guinip; Cameron Baker, Haley (Baker) Harbold and Caden Baker; Andrew and Amber Baker; and great-children Mathieu, Riley, Creed and Norah; along with many nieces and nephews. The visitation for William "Bill" Bandy will be Thursday February 18, at the Schoedinger Funeral Home located at 1051 East Johnstown Road, Gahanna, Ohio 43230 (614-939-4558) where the family visitation will begin at 2:00PM and general visitation is 3:00-5:00PM. The Funeral Service is Friday, February 19, also at the Schoedinger Funeral Home. An online live broadcast of the funeral will be available at Schoedinger.com and will also be available for streaming after the fact. There will be no graveside service due to the snow and cold weather. In lieu of flowers, please make donations to Shepherd’s Mission Fund at Shepherd Church of the Nazarene, 425 S. Hamilton Road, Gahanna, Ohio 43230. (www.shepnaz.org).

William Harold Bandy passed away peacefully at home on Wednesday, February 10, 2021 at the age of 91. Bill, as he was known by his family and friends, was born on the Bandy farm at the foot of the Wichita Mountains in Indiahoma, Oklahoma on... View Obituary & Service Information

The family of William H. "Bill" Bandy created this Life Tributes page to make it easy to share your memories.

William Harold Bandy passed away peacefully at home on Wednesday,...

Send flowers to the Bandy family.