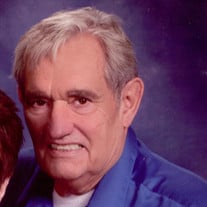 Wayne Andrew Royer, Sr, 81, of Johnstown, Ohio, passed away peacefully at his home on Thursday, September 2, 2021. He was born in Columbus on September 26. 1939, to the late Paul and Thelma (Busick) Royer. In addition to his parents, Wayne was preceded in death by his brothers Paul, Tony and Leon. Wayne is lovingly remembered by his wife of 59 years, Sherry Royer, daughter Nadine (Luke) Starkey, son Andy (Wendi) Royer, grandson Andrew Royer, granddaughters Chandler, Erin and Lauren Starkey, step-grandson Josh Rowe. Wayne, with his wife, Sherry, was a charter member of Church of the Resurrection, New Albany, where they were members of the Young at Heart Group. He was a member of Knights of Columbus Council 10941 and a charter member of the Fourth Degree Assembly 3580. Wayne was a veteran of the US Army where he served in the Military Police. He retired from the Columbus Police Department after 25 years of service and was a lifetime member of the Fraternal Order of Police. Wayne was a person who could build or fix anything. He especially enjoyed working on cars, whether repairing engines or body work. He was a former owner of Ken-Tom Auto Shop. He and his son, Andy, worked side by side to build go-karts and went to races on weekends, a special time of bonding for both of them. They also worked together on building projects as Wayne passed on his construction skills. He converted Nadine's first car from a standard transmission to automatic and taught her how to do body work. He was a Nascar fan and especially liked Dale Earnhart. He was always willing to help others, dropping whatever he was doing to go to their aid, including taking his granddaughters to school and picking them up. He often was called to pick up his grandson from school when he had strep throat and then giving him whiskey and honey to sooth his sore throat! Wayne appeared to be a man of few words, yet he also was a prankster, always teasing his grandchildren, and his jokes kept people laughing - or groaning - as the case might be. He was an animal lover and always had a rescue dog that he invited into his home and showed love. He said he hated cats, yet there was always at least one in their house!! Visitation will be held Thursday, September 9, 2021, at Schoedinger Northeast Funeral Home, 1051 E. Johnstown Rd., Gahanna, from 5pm - 8pm. A Mass of Christian Burial will take place Friday, September 10, at 11am, at Church of the Resurrection, 6300 E. Dublin Granville Rd., New Albany. Interment to follow at Resurrection Cemetery. In lieu of flowers, please consider a memorial contribution in Wayne's name to the Alzheimer's Association or a charitable organization of your choosing.

Wayne Andrew Royer, Sr, 81, of Johnstown, Ohio, passed away peacefully at his home on Thursday, September 2, 2021. He was born in Columbus on September 26. 1939, to the late Paul and Thelma (Busick) Royer. In addition to his parents, Wayne... View Obituary & Service Information

The family of Wayne Royer created this Life Tributes page to make it easy to share your memories.

Send flowers to the Royer family.