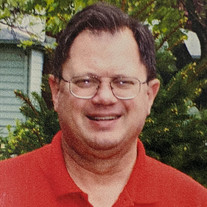 Warren John Goehring of Columbus, Ohio died Feb. 16, 2021 at 67 years of age following a prolonged illness. A native of Lorain, Ohio, Warren graduated from Admiral King High School and earned his Bachelor's Degree in Geology from The Ohio State University in 1976. He went on to have a 30 year career with Worthington Industries in both OH and MI, retiring as Quality Systems Manager at the Worthington Specialty Processing facility in Jackson MI in 2012. Although Warren's career was in Quality Control, his passion lay with black and white photography. Pursuing mastery of the medium, he attended the prestigious Brooks Institute of Photographic Art & Science in CA, eventually becoming so proficient that his works were featured in such publications as "Elle" magazine, "American Photo", and "Black & White Magazine". He continued to earn accolades, winning honors and awards in several juried photography shows in Los Angeles, Ann Arbor, Arizona, and Ohio. His devotion to both his work and his artistic pursuits, however, never took away from his devotion to his Ohio State Buckeyes! He will be forever remembered for his "Captain Buckeye" persona as he defended his alma mater to his co-workers who were fans of "that team up North". Warren is survived by his brother Kurt Goehring of Sandusky OH, sister Karen (Lawrence) Atwood of Powell OH, nephews Zachary (Anne Marie) Haldeman and Kevin Haldeman, step-niece Molly Slater, uncle David Porinchak, and many dear cousins, grand-nieces, and grand-nephews. He was predeceased by his parents Ralph W. and Mary Elaine (Porinchak) Goehring, brother-in-law Rick M. Haldeman, and step-niece Randi Maguire. In lieu of flowers, contributions can be made to LifeCare Alliance, 670 Harmon Ave. Columbus OH 43223.

The family of Warren Goehring created this Life Tributes page to make it easy to share your memories.

Send flowers to the Goehring family.