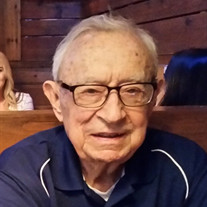 Warren Eugene “Gene” Bulman, age 99 of Upper Arlington, passed away Saturday, January 8, 2022. Gene was born and raised in Woodville, Alabama, son of the late George and Ada (Hodges) Bulman. Also preceded in death by his beloved wife, Verna Bulman, and brother, Arnold Bulman. Gene proudly served his country in WWII as a pilot and instructor with the U.S. Army Air Corp. He received undergraduate degree in Math and Physics from Berea College, master’s in Physics from Purdue University and doctorate in Electrical Engineering at The Ohio State University. Gene was an extremely intelligent man who was a natural leader. He worked at the National Bureau of Standards, Battelle, and was VP at Tecumseh. In 1964, he founded Ohio Semitronics, Inc., where he served as President. He was a member of the Aladdin Shrine, Masons, Rotary, and served on numerous boards throughout his life including Blue Cross of Central Ohio (Chairman 1983-4), Mercy and St. Anthony Hospitals, Marburn Academy and the United Methodist Children’s Home. He was honored with the Benjamin G. Lamme Meritorious Achievement Medal from OSU, Distinguished Graduate from Berea and Distinguished Alumni from Purdue. Gene had a competitive side to him, but above all, Gene was a family man who truly was a national treasure. He enjoyed playing cards, golf, and was a Ham radio operator. He will be greatly missed by his loving children, Linda (John) Iben and Gary (Kathleen) Bulman; grandchildren, Joanna Iben, James Iben, and Jennifer (Joshua) Goodwin; great grandchildren, Jackson, Jace, and Jianna Goodwin; and many other extended family members and dear friends. Memorial contributions may be made to the Shriners Hospital for Children, Attn: Processing Center, P.O. Box 947765, Atlanta, Georgia 30394 or to Berea College, CPO 2216, Berea, Kentucky 40404

The family of Warren Eugene "Gene" Bulman created this Life Tributes page to make it easy to share your memories.

Send flowers to the Bulman family.