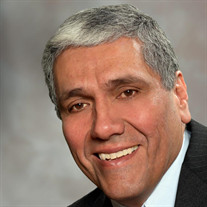 Walter Raul Lopez, 62, passed away on May 12, 2021 surrounded by the love of his family. He was born on November 7, 1958 in Lima, Peru. He was preceded in death by his wife, Nelly Cruz; and his father, Victor Lopez. Walter graduated from University of Lima, Peru with a Bachelor of Science in Industrial Engineering. He was the first of his family to immigrate to the United States in 1985, and lived in Los Angeles, California. He was later followed by his siblings, who always felt inspired and supported by his unconditional love. In 1991, he married his late wife, Nelly Cruz in Merida, Mexico and they welcomed their beloved daughter in 1993. He acquired his Real Estate and Broker License and lived in Los Angeles until 2000. Walter, his wife, and daughter moved to Columbus, Ohio in 2001, where he worked at Simpson Strong-Tie Company for 20 years. He was a huge soccer fan and often played soccer with his friends. He enjoyed riding his Harley Davidson motorcycle, loved playing cards with his family, and playing chess. He will always be remembered by his family and friends for his charismatic and whitful sense of humor, and a smile that filled the room with laughter and joy. Walter will be greatly missed by his daughter, Vanessa Lopez; mother Marcelina Antonieta Lopez; siblings, Rosario Lopez, Enrique (Nancy) Lopez, Victor (Teresa) Lopez, Aldo (Vanezza) Lopez, and Lourdes (Aldo) Ortega; and his dear nieces and nephews, Cesar, Karla (Greg) Bradburn, Enrique (Veronica), Pamela (Joseph) Long, Mauricio, Lilian, Andres (Maria Jose), Sebastian, Matias, Aldo, Andres, Sofia, Lucia, Lorenzo, Cayetana, Mia, and Juan Ignacio. Arrangements entrusted to SCHOEDINGER DUBLIN where a visitation will be held one hour prior and one hour after a memorial service at 6pm on Thursday, May 20, 2021. In lieu of flowers, donations can be made to the Lung Cancer Research Fund at the James Cancer Hospital Solove Research Institute ( Lung Cancer Research Fund at The James | Fund Number: 306059). Anyone is welcome to view his service at . Acknowledgements The Lopez family wishes to express their sincere gratitude to all those who have supported us during this time of loss. To share a video memory, visit .

Walter Raul Lopez, 62, passed away on May 12, 2021 surrounded by the love of his family. He was born on November 7, 1958 in Lima, Peru. He was preceded in death by his wife, Nelly Cruz; and his father, Victor Lopez. Walter graduated from University... View Obituary & Service Information

The family of Walter R. Lopez created this Life Tributes page to make it easy to share your memories.

Send flowers to the Lopez family.