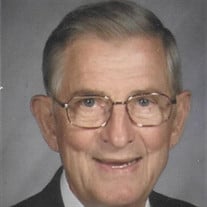 Wallace (Wally) D. Lewellyn, age 86 of Grove City, passed away at StoryPoint Senior Living Center on April 30th, 2021, after a 5 year battle with Alzheimer's Disease. He was preceded in death by his dear wife of 39 years Betty Sue Lewellyn, his parents; Wallace and Edna (Sharp) Lewellyn, sister; Edna Maye Gallion, brother; Joseph Lewellyn, great grandson; Tristen Lewellyn. Wally is survived by his children; Jeffrey Lewellyn, Jennifer Lewellyn and James (Terrie) Stone, grandchildren; Brooke (Tate) Bedwell, Steven Lewellyn, great grandchildren; Brody and Beckett Bedwell, siblings; Joanne Van Cleave, Jack (Wilma) Lewellyn, Jane (Mike) Sabens, many nieces and nephews and a host of dear friends. Wally grew up in Ladoga, IN, served in the Army in Germany for 2 years, graduated from The Cincinnati College of Mortuary Science and eventually landed in Grove City where he raised his family and lived most of his life. He worked for the Schoedinger Funeral and Cremation Service for over 40 years, mostly as the Funeral Director at the Grove City Chapel. He loved his job, the Schoedinger family, and mostly serving the people of Grove City during their time of loss. He was a follower of Jesus Christ and an active member of St. John's Lutheran Church for 52 years as well as a member of the Grove City Elks, The American Legion, Masonic Lodge and FoxFire Country Club. At one time he also served as president on the Grove City Cemetery board. Wally was also an avid basketball and golf fan. Wally's family will receive friends 1-4 PM Sunday May 9 at Schoedinger Grove City 3920 Broadway where a B.P.O.E. Service will be held at 3:45 PM. Family will receive friends 10-11 AM Monday at St. John's Lutheran Church 3220 Columbus St Grove City where the funeral service will follow at 11 AM. Pastor Patti Morlock officiating. Interment to follow at Grove City Cemetery With full military honors. Contributions may be made in Wally's name to the Alzheimer's Association www.alz.org or St. John's Lutheran Church in Grove City. Visit www.schoedinger.com to share a favorite memory of Wally or watch his life tribute video.

Wallace (Wally) D. Lewellyn, age 86 of Grove City, passed away at StoryPoint Senior Living Center on April 30th, 2021, after a 5 year battle with Alzheimer's Disease. He was preceded in death by his dear wife of 39 years Betty Sue Lewellyn,... View Obituary & Service Information

The family of Wallace D. "Wally" Lewellyn created this Life Tributes page to make it easy to share your memories.

Send flowers to the Lewellyn family.