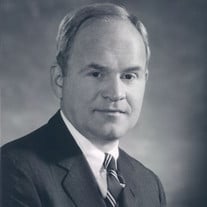 Wallace "Wally" Ray Barnes, age 92, died peacefully, in his home, on Monday, May 3, 2021, reuniting in Heaven with his wife, Honey, the love of his life. Born November 7, 1928, in Easton, Pennsylvania, to Charles and Erma Barnes. Married July 2, 1958, in Pittsburgh, Pennsylvania, Wally was a devoted husband, a loving father, son and brother. He grew up in the small town of Stewartstown, Pennsylvania. He earned his Eagle Scout in 1943 through Boy Scouts of America. He was a graduate from Stewartstown High School in 1945, attended Maryville College, Tennessee, and graduated from Duke University in 1950, while serving as a Midshipman, United States Navy. As an officer in the Navy, he went to sea for three years, including sweeping for mines in the North Korean harbors during the Korean War, where he qualified for command of his ship, the U.S.S. Curlew. A Phi Beta Kappa member, Wally attended Harvard Business School and earned his law degree at Harvard in 1957, where he served as a proctor in Harvard Yard. Admitted to the Pennsylvania Bar in 1958, he began his legal career with Allegheny Ludlum Steel Corporation, Pittsburgh in 1957, and in 1962 began working for the Columbia Gas Pittsburgh companies where he was promoted to Vice President of Governmental Relations. In 1973, Wally served as Secretary and General Counsel for Columbia Gas Distribution Companies of Kentucky, Maryland, New York, Ohio, Pennsylvania, Virginia and West Virginia, headquartered in Columbus, Ohio. He was also the Director of Columbia Gas of Ohio and retired in 1996. His retirement consisted primarily spending time with his family, playing tennis with his legendary "lob shots" at his beloved Swim and Racquet Club, Columbus, Ohio, and traveling with his wife, some of which is described in "The Old Couple and The Little Dog," a book written by his wife, Honey B. Barnes. Wally is survived by his daughter, Elizabeth "Bebe" M. Barnes; grandchildren, Sarah (Jeffrey) Manning, Trent (Liz) Ecklar, Crystal Cook (Matt) Weber, Elizabeth "Lizzi" (Emily) Ross, Melissa, and Andrew Barnes; five dearly loved great-grandchildren, Brenden, Skylar, Zack, Lydia, and Juliette; many loving nieces and nephews; his loyal Chihuahua and companion, Bella. He is preceded in death by his wife, Helen "Honey" Bartley Barnes; his sons, Charles "Chip" C. Barnes, Douglas W. Barnes; his sister, Lila B. (Earl) McGovern; and parents, Charles Hicks and Erma Victoria (Saylor) Barnes. Wally was blessed with a long life that was well lived. He will be missed by all who knew him. A special thank you of appreciation to the wonderful staff at Hospice of Central Ohio for their exceptional care which was given to Wally and his family as his health started to decline. The family will receive friends on Saturday, May 15, 2021, from 2:00 to 4:00 p.m., at SCHOEDINGER NORTHWEST, 1740 Zollinger Rd., Columbus Ohio 43221. In lieu of flowers, Wally's wishes were that a copy of "The Old Couple and The Little Dog" be shared with a friend. Please visit www.schoedinger.com to share memories and condolences. Please click on the Memory Maker link below to leave a private video message for the family at https://memorymaker.tv/Events/recorder.html?LpirCQRoLlPLFaZ.

Wallace "Wally" Ray Barnes, age 92, died peacefully, in his home, on Monday, May 3, 2021, reuniting in Heaven with his wife, Honey, the love of his life. Born November 7, 1928, in Easton, Pennsylvania, to Charles and Erma Barnes. Married July... View Obituary & Service Information

The family of Wallace "Wally" Ray Barnes created this Life Tributes page to make it easy to share your memories.

Send flowers to the Barnes family.