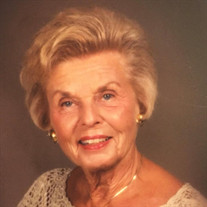 Vivian D. Broehm of Columbus, went to be with her Lord and Savior in the early morning of December 7, 2020. She was born on July 12, 1930 in Columbus, OH. She was preceded in death by her parents, Clell and Jessie Garwick and her husband of 58 years Donald E. Broehm. She is survived by her two sons, David (Debbie) and Dale and four grandchildren, Michael, Christopher, Andrew (Mallory) and Katie, and one great-grandchild, Cooper Broehm and several nieces. Vivian graduated from Central High School in 1947 and from Capital University where she was elected homecoming queen in 1951. It was a blessing for her to marry her classmate Don Broehm in 1952. Her career days included executive secretary to the treasurer of Farm Bureau Coop Association followed by employment at Nationwide Insurance as personnel assistant and then at Shoe Corporation of America as personnel manager. During her days as a stay-at-home mom, she held volunteer roles at Faith Lutheran Church, Whitehall, Columbus Public Schools, PTA, Volunteer coordinator and served on the Council for American Federation of Aging Research, a member of CUAC and a sorority advisor to Zeta Pi Lambda at Capital. She previously was an active member at Peace Lutheran Church, Gahanna, a member of Columbus Country Club and Jefferson Country Club. The family would like to thank everyone at Kensington Place, the caregivers from Homewell and Capital City Hospice for their kindness and support. A Celebration of Life Service will be held on Saturday, October 30 at Peace Lutheran Church in Gahanna beginning at 10:30 am. Family will receive visitors an hour before the service. Masks are encouraged but not required and there will be a separate section for seating with those that are concerned or compromised. The service will also be streamed live on YouTube for those concerned about Covid or from out of town via the Schoedinger website and will be recorded for later viewing. Please visit www.schoedinger.com to access the service or to send messages of condolence.... In lieu of flowers the family requests donations to Peace Lutheran Church or Capital University in Vivian's memory. To view the live webstream of the service, visit this link - https://youtu.be/9eMRcauaU0Q

Vivian D. Broehm of Columbus, went to be with her Lord and Savior in the early morning of December 7, 2020. She was born on July 12, 1930 in Columbus, OH. She was preceded in death by her parents, Clell and Jessie Garwick and her husband of... View Obituary & Service Information

The family of Vivian D. Broehm created this Life Tributes page to make it easy to share your memories.

Vivian D. Broehm of Columbus, went to be with her Lord and Savior...

Send flowers to the Broehm family.