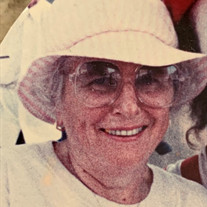 Violet Leontina Harlow (neé Selcho) passed away on Friday February 5, 2021. Her final days were spent surrounded by her family, telling stories of her life and keeping the memories going. She was born on December 8, 1923 to Gottfried Selcho and Christina Fink in Ritzville, Washington. Violet moved from Ritzville to Spokane, Washington at a young age to begin her career as a registered nurse with the Sacred Heart School of Nursing. Violet went on to continue in the field nursing for 40 years, spending the majority of her career working at the Veterans Affairs. In the early 1940s, Violet met the love of her life, Joe, in Culver City, California. He was working with the U.S. Army stationed there, and they soon married in 1946 and settled in Dayton, OH. Violet spent her life in Belmont, participating in the Ohio Wander Freunde walking club, tending to her flourishing garden, and baking up the best pies in all of the Midwest. She also enjoyed spending time with her friends playing bridge, namely her best friend Aggie, as well as volunteering at the Miami Valley Hospital. Violet belonged to the Memorial Church of Christ in Dayton, and her favorite time of the year was seeing poinsettias fill up church pews around Christmas. She left her legacy with her two sons Jym and Dana. After the passing of her husband, she moved to Dublin, OH in 2009 and quickly found friends and new hobbies there. Her most beloved activity was going swimming and doing water aerobics with a local group, who soon became her close friends. She loved her two rescue cats, Silk and Little Bit, and welcomed her "grand-dog" Nico with lots of love. She continued to spend time with both of her sons and their growing families over the years and treasured her grandchildren. She is survived by her two sons Jym (Catherine Wicks) Harlow and Dana (Shantha Balaswamy) Harlow, 4 grandkids and many great-nieces and nephews. She was preceded in death by her beloved husband of 62 years Joseph Paul Harlow, her sister Stephanie Jacobsen, her brother-in-law Jake Jacobsen, and her cherished grandson Kalman Harlow. Her final resting place is in Woodland Cemetery in Dayton, OH.

Violet Leontina Harlow (neé Selcho) passed away on Friday February 5, 2021. Her final days were spent surrounded by her family, telling stories of her life and keeping the memories going. She was born on December 8, 1923 to Gottfried Selcho... View Obituary & Service Information

The family of Violet Leontina Harlow created this Life Tributes page to make it easy to share your memories.

Send flowers to the Harlow family.