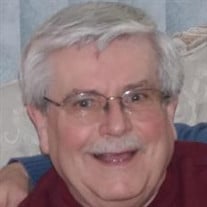 Vincent Paul Kramer Jr., beloved father, grandfather, businessman and scholar, passed away following a brief battle with Covid, on Sept. 15, 2021, at the age of 77. Fully vaccinated in early 2021, Paul's illness was a rare breakthrough infection. Paul was born in Fort Wayne, IN, to the late Vincent and Solina (Langhals) Kramer. He grew up in Grand Rapids, MI, the eldest of six siblings. He excelled in academics, attending Aquinas College before focusing on Latin American history, where he earned his master's degree from Michigan State University. It was between jobs teaching history at Western Kentucky University and Texas Christian University that Paul began his business career with The Plant Place, a retail shop, in Bowling Green, KY. In March 1986, Paul married Mary C. Martin and they moved to Ohio where Paul joined his parents' business, Vince Kramer Associates. After self-incorporating in 1994, Paul and his wife continued the family business. VKA survived the onset of the internet age with the help of his dear friend Pat Taylor. Paul considered people as more than customers, both talking with them and referring to them, as friends. It was a personal goal of Paul's to see VKA celebrate 50 years in business, and he met that goal this year! With Mary's passing in 2016, Paul sought to strengthen his ties to his spiritual community with First Community Church. It was through the FCC's Progressing Spirit class where he met Jill Short, a kindred spirit. Paul and Jill enjoyed time with family, friends and the arts and entertainment scene in Columbus. Paul had a wonderful inquisitive mind and a passionate intellect. He remained a lifelong avid reader. Paul relished family gatherings with son Matthew Martin, his wife Una and two grandsons, Felix and Arlo in Columbus. He talked with pride about his granddaughter Tessa. At family gatherings, all appreciated his detailed accounts of family history, dubbing him the family historian. His memory was simply incredible, recalling details from books read long ago, as well as music and movies from the past. Paul enjoyed the unique, combining his knowledge with his sense of humor, including his translation of the Notre Dame fight song into Latin. Paul will be terribly missed by all who knew him. He was preceded in death by his wife, Mary C. Martin and his younger brother Steven Kramer. He is survived by his daughter, Kristin Kramer and son, Karsten Kramer from an earlier marriage; sons and daughters-in-law, Matthew and Una Martin, Monte and Marisol Martin; grandchildren, Tessa Kramer, Felix Martin and Arlo Martin; his sisters Mary Kramer and Pamela Kramer; his brother David Kramer and his sister and brother-in-law Barbara and Daniel Olmsted; and his significant other, Jill Short. Memorial service to be held at 1 p.m., Nov. 27, 2021 at SCHOEDINGER NORTHWEST CHAPEL. The family welcomes memories to be shared online at https://www.schoedinger.com/obituaries/Paul-Kramer-5/#!/Obituary . In lieu of flowers, contributions may be made in memory of Paul to The Burkhart Center at https://www.theburkhartcenter.org/

The family of Paul Kramer created this Life Tributes page to make it easy to share your memories.