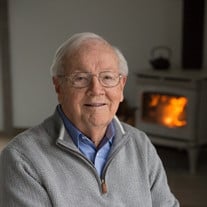 Here is the link for the livestream of Dad's Celebration of Life. https://vimeo.com/event/1254846/a6597c6d76 Verlin Joseph (Jody) Warnock was born on a farm in Howard County, IN, on June 10, 1927. After high school graduation, and before his eighteenth birthday, he joined the Navy destined to enter the Captain Eddy USN Program for training of electronic technicians. VE-Day occurred the very next month while the training program continued to completion for Verlin until July 1946. Verlin entered the engineering program at Purdue University in the Fall of 1946. The following year Verlin married his high school sweetheart, Helen Jean Brewer, who also was a Purdue student, and both graduated together in June 1950. Verlin graduated with a BS degree, with Distinction, in Electrical Engineering. He was a Registered Professional Engineer. Verlin joined the American Electric Power (AEP) after graduation. His career was interrupted during the Korean War in 1951 by orders to return to active duty in the Navy, but after 45 days he was commissioned as an Ensign and returned home where he attended weekly training sessions at local reserve units. AEP consisted of seven operating companies in the Midwest and a corporate headquarters in New York City. His career at AEP was in planning and development of the distribution system of the Indiana and Michigan Company and later for all seven operating companies. In 1989 he retired from AEP after 39 years of service that took him from Marion and Ft. Wayne, IN, to New York City and, finally, Columbus, OH. After retirement, Verlin and Helen also lived in Farmington Hills, MI near their daughter, Elaine. During their years on the East Coast, they purchased a summer home on Long Beach Island in Barnegat Light, New Jersey that was their summer residence in their retirement and the gathering place for their family for the last forty-nine years, something they saw as a legacy for their family. Helen passed away in 2013, after 65 years of marriage. In his later years, Verlin divided his time between his daughters' homes in Ohio and California and his summer home in Barnegat Light, where he enjoyed being part of many family gatherings and events. He was committed to his faith and was part of church communities everywhere he spent time. Verlin enjoyed photography, quarter horses, boating and flying when he was younger, and had a life-long love for reading and electronics. Verlin is survived by two daughters, Elaine Major of Columbus, OH, and Ginny (Chuck) Quick of Tiburon, CA; five grandchildren, Benjamin (Nadja) Quick of Old Greenwich, CT, Caroline (Jason) Dombrowski of Upper Arlington, OH, Blake (Amanda) Major of Liberty Hill, TX, Kyle Quick of San Rafael, CA, and Matthew (Erin) Quick of Arlington, VA; step-grandson, Peter Quick; great-grandchildren, Caleb and Eve Major, Noah, Lauren and Clara Dombrowski, Kendall and Brielle Quick, and Giselle Stavenhagen. Those who knew and loved him will miss his keen intellect and quiet strength. A Celebration of Life will be held at 11AM Saturday, September 11, 2021 at Worthington Christian Church, 8185 N. High Street, Columbus, OH., with visitation from 10 - 11AM. In lieu of flowers contributions may be made to CareNet Pregnancy Center, 2826 Coolidge Hwy., Berkley, MI 48072 , Lifehouse Agency, 18 Professional Center Parkway, San Rafael, CA 94903 , or Worthington Christian Church, 8185 N. High Street, Columbus, OH 43235.

Here is the link for the livestream of Dad's Celebration of Life. https://vimeo.com/event/1254846/a6597c6d76 Verlin Joseph (Jody) Warnock was born on a farm in Howard County, IN, on June 10, 1927. After high school graduation, and before... View Obituary & Service Information

The family of Verlin Warnock created this Life Tributes page to make it easy to share your memories.

Here is the link for the livestream of Dad&#39;s Celebration of Life....

Send flowers to the Warnock family.