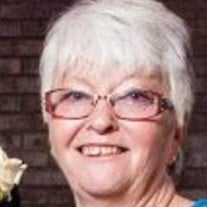 Valerie Conley, 74, of Whitehall, OH passed away on April 4, 2021 in her home. "Val" was born on June 17, 1946 in Dover, DE. After graduating from Palo Duro High School in Amarillo, TX in 1963, she briefly served as an administrative assistant for the sheriff's department where her father was a deputy sheriff. She went on to be a civil servant of the U.S. government, most recently at DSCC in Columbus, OH. She retired in October of 2020, after more than 38 proud years of service over a period of nearly 47 years across many roles, including executive assistant, supply clerk, and training and supply manager. Valerie considered herself an "Air Force brat" and moved many times in her life, both as a child and as an adult, living in Delaware, Texas, Massachusetts, Nebraska, Montana, California, Mississippi, and Ohio, and had traveled to almost every state. She was known for her big heart and her big personality, and she was a terrific story teller, even though you might hear the same story more than once. Val was baptized and confirmed in the Catholic faith through the RCIA process in the mid-1980's, and regularly attended mass in person and online. She was preceded in death by her parents, Joseph Jester Conley and Eva Irene Truman, both of Wilmington, DE, as well as her sister Jorene Conley Bennett, of Haltom City, TX. She is survived by her brother Bruce Conley and his wife, Gina, of Murfreesboro, TN, as well as four sons; Paul Finfrock and his wife, Tia, of Bastrop, TX. Roy Quintanilla, of Kansas City, MO. Randy Piatt and his wife, Mary Ellen, of Blacklick, OH. Michael Piatt and his wife, Jessica, of Helena, MT. Her beloved chihuahua, Pebbles, will get the love and attention of Valerie's good friend Holly Shults, of Newark, OH. Her 8 grandchildren and her many friends share in our grief. ARRANGEMENTS ENTRUSTED TO SCHOEDINGER NORTHEAST. Services will be private for the family. In lieu of flowers, the family asks that you make a donation to your favorite charity. Some of her favorites include the Susan G. Komen Breast Cancer Foundation (as a multi-time survivor of breast cancer) and the Boy Scouts of America. To share a memory or leave online condolences, visit www.schoedinger.com.

Valerie Conley, 74, of Whitehall, OH passed away on April 4, 2021 in her home. "Val" was born on June 17, 1946 in Dover, DE. After graduating from Palo Duro High School in Amarillo, TX in 1963, she briefly served as an administrative assistant... View Obituary & Service Information

The family of Valerie Irene Conley created this Life Tributes page to make it easy to share your memories.