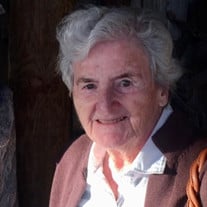 Ursula lived her life to the fullest until October 6, 2020 when she died of natural causes. She was born December 26,1927, Ursula M Pennrich; and raised amongst an extended family in a beautiful, small German city, Bingen am Rhein. The youngest of 4 children, she had a happy childhood until WWII hit and took her two beloved brothers, Richard and Adolf. After the war, she met a young doctor while recovering from an appendectomy in her hometown hospital. Apparently not so shy, she asked him to share some wine while she was still a patient in the hospital! Gus and Ursula were married in 1954 and then emigrated to the United States, first to Huntington, West Virginia and then Columbus Ohio, where Gus finished his residency in internal medicine. They were blessed with four children. Ursula is survived by Ingrid Mayyasi, Richard Jochem and his wife Carol, Victor Jochem and his wife Laura and Christine Auch and her husband Todd, 12 grandchildren, 2 great-grandchildren, as well as several nieces and nephews in Germany, and many, many friends. Gus preceded her and passed away in 2007. Ursula was a lovable and well-loved woman who had many friends, especially Germans! It was not unusual to answer the phone at home and to be spoken to in German. No English, just German! You were expected to understand, and for the most part her children did. She had lots of interests swimming, walking, music - especially Beethoven - and reading. Although macular degeneration had taken most of her vision, she continued to "read" books on tape nearly every day. Ursula was still fond of her daily swim and/or walk outside. Despite the fact that she was 92, it was a shock to us all that she passed away. She was still so full of life, enjoying herself, full of good humor and always happy. She was a good woman and a wonderful mother and her family will miss her tremendously. A private burial will take place in Columbus with only immediate family. A celebration of Urusula's life will take place when it is again safe for us to gather and celebrate a remarkable life. Please visit www.schoedinger.com to share memories and condolences. Funeral arrangements entrusted to SCHOEDINGER NORTHWEST CHAPEL.

Ursula lived her life to the fullest until October 6, 2020 when she died of natural causes. She was born December 26,1927, Ursula M Pennrich; and raised amongst an extended family in a beautiful, small German city, Bingen am Rhein. The youngest... View Obituary & Service Information

The family of Ursula M Jochem created this Life Tributes page to make it easy to share your memories.

Send flowers to the Jochem family.