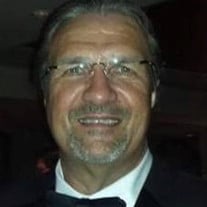 To view the webcast of the service at 11am, please go to: https://webcasts.lifetributes.com/1116344 Tony S. Swain, age 71, of Dublin, died Wednesday, January 20, 2021, at his residence. Preceded in death by parents Merle and Patience Swain; grandson Evan Swain Abrams; and sister-in-law Deborah Swain. Survived by wife of 42 years Pamela; daughter Cathy (Bob) Swain-Abrams; son Ryan (Mandy); grandchildren Gillian and Gavin Abrams; brother Merle Swain Jr. Graduate of Lancaster High School and Columbus Tech. Retired Chief Operating Officer of Buford Satellite Systems. Former President of Tele-Media Corp. Inducted into Cable Television Pioneers. Former member and President of Christians in Cable. Member of the Society of Cable Television Engineers. He loved his time living in Key West and West Palm Beach, FL, Bellefonte, PA and Calhoun, GA. He was an animal lover and was particularly fond of his dog Ladd. Tony was devoted to his work and family and The Ohio State Football team. Family will receive friends 3-6 Sunday, January 24, at Schoedinger Dublin, 5980 Perimeter Drive where a funeral service will be 11am Monday. Interment Floral Hills Memory Gardens, Lancaster, OH. Contributions may be made to Lutheran Social Services Faith Mission, 245 North Grant Avenue, Columbus, Ohio 43215, in his memory. Condolences may be sent to the family at www.Schoedinger.com . "The day that I have been dreading for my entire life has come. My Dad, Tony Swain, took his last breath around 6:05am today with his wife, Pamela Miller Swain and me by his side. Following a diagnosis of Idiopathic Pulmonary Fibrosis, Dad pursued every option he could to extend his life. He had a single lung transplant on 12/22/18 followed by countless complications, including kidney failure and 3xs weekly dialysis. To say he was a warrior and fought hard for his health is an understatement. A single Facebook post cannot capture who my Dad was to me and others who knew him. His personality was such that he would meet people in a weekend who would turn into lifelong friends. He loved all people and talking with them. He loved his work and started as a lineman for a cable television company in 1969, working his way up to President of the company, and later partnership in another company and even patented a piece of technology. He lived in 4 states, travelled for work and vacation to numerous countries and all through the USA, and through it all made a wonderful life full of opportunities for my brother, Ryan Swain and me, as well as our families. More than anything, he loved his wife and family and told us he would miss us. I live with the hope promised to us in Christ that we will be with Dad again. He is no doubt experiencing the most amazing homecoming with our Lord, his beloved Grandma and Grandpa, his mom and dad, and his first-born grandson, my baby Evan, amongst many others. "The Dude," a huge fan of THE Ohio State Buckeye football team, lover of Bob Dylan, his Jeep, and much more. My Dad was larger than life in size and personality. Some of my best parts are like him. I am thankful to God for giving me this man as my Daddy. He was the best." Cathy Swain-Abrams

To view the webcast of the service at 11am, please go to: https://webcasts.lifetributes.com/1116344 Tony S. Swain, age 71, of Dublin, died Wednesday, January 20, 2021, at his residence. Preceded in death by parents Merle and Patience Swain;... View Obituary & Service Information

The family of Tony Swain created this Life Tributes page to make it easy to share your memories.

To view the webcast of the service at 11am, please go to:

Send flowers to the Swain family.