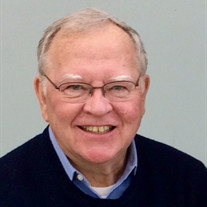 Timothy John Harrington, 77, died at home on September 22, 2021, after a shockingly brief battle with pancreatic cancer. He was born to James Gardner and Lilian (Putt) Harrington on May 14, 1944, in Minneapolis, Minnesota. He attended St. Peter's elementary in Minneapolis where in the fifth grade he met his future wife, Trude Nordquist. He attended De LaSalle High School in Minneapolis where he formed a core group of friends whose support and friendship would be instrumental to Tim and Trude until his literal last moments. He joined the United States Army, serving in the Special Forces and earning his Green Beret. After serving, he returned first to complete his bachelor's degree at the University of Minnesota and then his Master's in Public Health Administration at the University of Missouri, Columbia. His successful career was spent in healthcare managing hospitals as chief executive. After marrying Trude in January 1969, he worked at Newton-Wellesley Hospital outside of Boston in Newton, Massachusetts. Following the birth of his two sons, the family moved to Chippewa Falls, Wisconsin where he helmed the operations at St. Joseph's Hospital. Following the births of his two daughters, the family moved to Louisville, Kentucky where he ran Sts. Mary and Elizabeth Hospital. After 5 years, he again moved onward and upward, this time to Victory Memorial Hospital in Waukegan, Illinois. Tim served as the president and CEO of the Vista Health System for the final 17 years of his career. During his tenure, projects such as the Vista Imaging Center and Vista Ambulatory Surgery Center were completed, greatly expanding services to the community. Additional homes at Victory Lakes senior living were built. Tim was extremely proud of his roll in establishing and volunteering with the ElderCARE services program and of the simple good it did within the community. He retired in 2005. In 2015, Tim and Trude moved to Gahanna, Ohio, to be near their grandchildren and to escape Illinois' oppressive taxes. In each place that he lived and in every job that he had, Tim made strong, enduring friendships throughout his communities. Tim loved children and babies. He was a life-long voracious reader, a master of trivia, and a whiz at solving crossword puzzles. He enjoyed the horses, the dogs, Caribbean stud poker, and other games of chance - always with the reminder that, "You can eat your betting money, but don't bet your eating money." He was an expert cribbage player who wanted it known far and wide that, in his final game, he skunked his opponent. Tim was known for his quick, clever wit and amazing sense of humor. It was matched only by his generosity of spirit and love of family. He was a man of morals and a do-gooder, both privately and professionally. He and Trude were active in their parish churches and communities where they lived. He was a man of faith who studied the Bible at a depth surpassing most seminarians and who greatly enjoyed contemplating and discussing the philosophies of faith, Catholicism, and what it means to be a good man. Tim spent his retirement years globe trotting to visit friends and family and to see many wonders of the world. He will be deeply and dearly missed. Tim was preceded in death by his parents Jim and Lil; his brothers Jim, Mike, and Terry; and his sister Patty (Ryan). Left to cherish his memory are his wife of 52 years, Trude (Nordquist) Harrington; children Jonathan Harrington (Jenny Miller), Peter Harrington (Miguelina Pillier), Beth (TJ) Harpster, and Kathleen (Richard) Bousquet; six grandchildren; several nieces and nephews; and many, many friends. Visitation will take place on Tuesday, October 26, 2021, from 10:15 AM - 11:45 AM at Church of the Resurrection, 6300 East Dublin Granville Road, New Albany, OH 43054, followed by a mass of Christian burial at 12 noon. The burial will take place at 11:00 AM October 27, 2021, at Dayton National Cemetery. Arrangements entrusted to Schoedinger Northeast. In lieu of flowers, the family requests donations in Tim's memory and generous spirit to: LifeCare Alliance - 1699 W. Mound St., Columbus, Ohio 43223 - www.lifecarealliance.org De LaSalle High School - One DeLaSalle Drive, Minneapolis, MN 55401 - www.delasalle.com Doctors Without Borders - 40 Rector St., 16th Floor, New York, NY 10006 - www.doctorswithoutborders.org

Timothy John Harrington, 77, died at home on September 22, 2021, after a shockingly brief battle with pancreatic cancer. He was born to James Gardner and Lilian (Putt) Harrington on May 14, 1944, in Minneapolis, Minnesota. He attended St. Peter's... View Obituary & Service Information

The family of Timothy Harrington created this Life Tributes page to make it easy to share your memories.

Send flowers to the Harrington family.