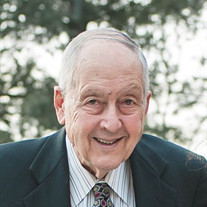 Thomas Boykin Sherrill, III, age 90, completed his life’s journey on September 1, 2021, in Columbus, Ohio. Tom was born on November 19, 1930, in Tampa, Florida, the only child of Mary (Addison) and Thomas Boykin Sherrill, Jr. Tom began selling Liberty magazines in Tampa, at nine years old. Two years later, he became a newspaper carrier for the Tampa Daily Times. He was named the Times’ carrier of the year in 1944 and named district manager in 1949. Tom graduated in 1949 from Plant High School in Tampa. He served in the United States Navy from 1951 to 1956. Tom joined the Tampa Tribune in 1956, and was circulation director for both the Tribune and Daily Times by 1962. He became the circulation director of the Sarasota Herald-Tribune and the Sarasota Journal in 1967. Tom married Sandra Evans in Birmingham, Alabama on December 27, 1969. In August 1975, he joined The Columbus Dispatch as circulation director, was elected to the board of directors in 1977, and became vice president in 1978. Tom retired from The Dispatch at the end of 1996. He is a past president of the Southern Circulation Managers Association, the International Circulation Managers Association, and the Ohio Newspaper Association, and is recipient of the top achievement award of each of these organizations. Tom was also elected to five two-year terms on the board of directors of the Audit Bureau of Circulations. He was chairman of the advisory board of the Salvation Army, a trustee and past chairman of the Better Business Bureau of Central Ohio, and a member of the executive board of the Simon Kenton Council of The Boy Scouts of America. Tom served as president of the Kiwanis clubs of Tampa, Sarasota, and Columbus, and had 56 years of perfect attendance. He was a member for 45 years and chairman of the administrative board of Northwest United Methodist Church, member of the president’s advisory council of the Methodist Theological School, and past president of Wesley Glen retirement center. Tom is preceded in death by his parents, Mary Addison Hanley and T.B. Sherrill, Jr. He is survived by his wife, Sandra Evans Sherrill; sons and daughters-in-law, Thomas G. and Heather Sherrill and Stephen A. and Katie Sherrill; grandchildren, Evan, Christian, and Lily Sherrill; and stepsister Sally Rowlinson. Memorial gifts may be made to The Salvation Army in Central Ohio, 966 East Main Street, Columbus, Ohio 43205 or Kiwanis Club of Columbus, P.O. Box 20334, Columbus, Ohio 43220.

The family of Thomas Boykin Sherrill, III created this Life Tributes page to make it easy to share your memories.

Send flowers to the Sherrill family.