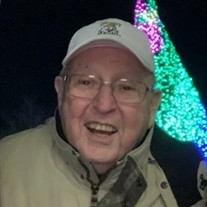 Thomas Edward Lauderback, born October 25, 1936 in Detroit, Michigan, passed unexpectedly surrounded by the family he loved, August 5, 2021. Tom was preceded in death by his parents, Lawrence and Gladys; his brother, Larry; sisters, Lois and Alice; and niece, Ann Marie. He is survived by his wife of 59 years, MaryLou; his sons, David (Lauren) and Daniel (Stephanie); and daughter, Deanna (Jim) Jones; grandchildren, Brady, Mitch (Sarah), Corinne, Zack, Leah, Aiden, Thomas, Daniel, David and many beloved nieces and nephews. At 19, Tom was invited to try out for the Detroit Tigers, he was a left-handed pitcher with a knee buckling curve ball, as a lifelong Tigers fan, this was a dream come true. Tom served in the United States Army at the end of the Korean War. After the war ended, Tom worked as a police officer in Harper Woods Michigan, where he met MaryLou. Tom attended Wayne State University where he earned his Bachelor’s degree and began a career with Nationwide Insurance as a claims adjuster, which brought him to Columbus, Ohio. He continued his career at Nationwide as an agent for over thirty years. The move South to Columbus, took him away from family up North, but he and MaryLou made lifelong friends in their new home. Even after living half of their lives in Columbus, anyone who knew Tom, knew his blood ran Maize and Blue. Tom loved “The Rivalry” almost as much as he loved watching his grandchildren in all of their endeavors. Tom was a proud member of the Knights of Columbus, 3rd order, and spent many years playing in various golf and softball leagues. He lived for coaching his boys in the Forest Park Youth Baseball League and later at Saint Anthony. He was a proud supporter of Saint Francis DeSales High School and the Stallion athletic programs. Tom and MaryLou enjoyed traveling with great friends to all corners of the globe and especially enjoyed family trips to Hilton Head and boating at Apple Valley. Dad never met a stranger, much to the embarrassment of his grandchildren. Tom loved sharing his stories, which always got a little more elaborate with each telling. He was blessed to enjoy lifelong friendships made from his softball days, the neighborhood and the Saint Anthony Church Community. A special thank you to the nursing staff at Riverside Methodist Hospital and especially the staff of the Surgical Intensive Care Unit that showed such kindness and compassion. A Mass of Christian burial, officiated by Father Tony Davis, will take place on Thursday, August 19th at 10am at Saint Matthias Church, 1582 Ferris Road, Columbus, Ohio, 43224. Graveside internment will follow at Resurrection Cemetery immediately after the Mass. In lieu of flowers, donations can be made in Tom’s name to Saint Jude’s Children’s Hospital or the Crohn’s & Colitis Foundation.

The family of Thomas Lauderback created this Life Tributes page to make it easy to share your memories.

Send flowers to the Lauderback family.