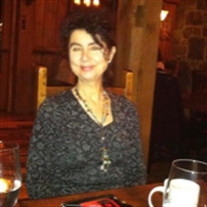 Theresa "Terri" Marie Mitchell, 64, of Columbus, Oh went to be with her Lord and Savior unexpectedly early in the morning, December 23, 2021. Terri was born to Dr. Nicholas and the late Marianne (nee Waugh) Pagano in Philadelphia, PA. After graduating from Centerville High School in Centerville, OH she attended and graduated from Miami University with a degree in English. After getting the "scoop" at the Beavercreek Daily News as a reporter she started a career with the airline industry as a flight attendant where she worked till her retirement in 2020. She met the love of her life, Daniel Mitchell, in 1998 and they married in 1999 and lived happily ever after for 22 years. Terri, as a lover of art, food and people, filled herself up with God's affection which naturally spilled out on those around her. Her light burned brightly wherever she traveled. Her adventurous passion took her to many foreign countries, hikes and bicycle rides. Recently, she and Dan became ordained ministers at Call to Holiness International Ministry where they spread the message of God's love to the hurting world around her. Dan and Terri were instrumental in supporting the start up of an orphanage in Kenya Terri will be missed by her husband, Dan, her dad, Nicholas, her brothers Nick (Janice), Mark (Cindy), Chris (Alyce), Paul (Donna), and sisters, Janet (David, deceased) and Kathy (Michael) and sister and brother in law Heidi and Michael Ries as well as many nieces and nephews. Terri is predeceased by her mother, Marianne and sister, Karen Norward (Byron, surviving) where they had a joyful reunion with each other . Celebration of life will be January 4th at Schoedinger Funeral Home 6699 N. High St. , Worthington, OH. Viewing from 10 to 12 with a service to follow at 12 pm. Donations in her name can be made to New Hope Orphanage in Kenya at https://www.cthim.org/

Theresa "Terri" Marie Mitchell, 64, of Columbus, Oh went to be with her Lord and Savior unexpectedly early in the morning, December 23, 2021. Terri was born to Dr. Nicholas and the late Marianne (nee Waugh) Pagano in Philadelphia, PA. After... View Obituary & Service Information

The family of Theresa Marie Mitchell created this Life Tributes page to make it easy to share your memories.

Theresa &quot;Terri&quot; Marie Mitchell, 64, of Columbus, Oh went to be...

Send flowers to the Mitchell family.