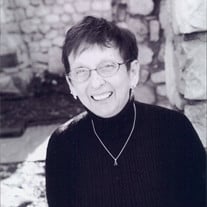 Theresa M. Bowers, age 78, passed away on Sunday, September 20, 2020. Theresa was born in Columbus, Ohio, on November 18, 1941, to the late Wendelyn and Ann Merrick Saile. She was originally married to Nelson (Tony) Royer, with whom she had four beautiful children. Nelson passed in 1995. Theresa had remarried to Dr. Donald F Bowers in 1981 and added his son Bruce to her family. Donald passed away in 2016 after they had lived a happy loving life through Ohio State. Theresa worked at The Ohio State University for 42 years and was a dedicated employee and supporter. Just as with her children, she was invested in mentoring and support of developing young people. Theresa lived life with great passion and poured herself into her family, her religion and her job. Anyone who encountered Theresa was enthralled with her desire and zest for life. Theresa will be deeply missed by her loving children Paul (Karen) Royer, Mark (Deborah) Royer, Andrea (Norm) Pfaadt, Renee (Scott) Kasun, and Bruce (Annie) Bowers; 16 grandchildren Jordan, Tony, Ryan, Ethan, Grace, Dylan, Noah, Elyse, Rachel, Adam, Zach, Callan, Keegan, Tucker, Darby, and Garrett; and two great-grandchildren. Family will receive friends from 4:00 to 7:00 p.m. Thursday, September 24, 2020, at SCHOEDINGER NORTHWEST CHAPEL, 1740 Zollinger Road, Columbus, Ohio 43221. Mass of Christian Burial will be at 10:30 a.m. on Friday, September 25, 2020, at Immaculate Conception Church, 414 E. North Broadway, Columbus, Ohio 43214 with interment to immediately follow at St. Joseph Cemetery. In lieu of flowers memorial contributions may be made to OhioHealth Foundation, c/o: Kobacker House, 3430 OhioHealth Pkwy, Columbus, Ohio 43202. Please visit www.schoedinger.com to share memories and condolences.

Theresa M. Bowers, age 78, passed away on Sunday, September 20, 2020. Theresa was born in Columbus, Ohio, on November 18, 1941, to the late Wendelyn and Ann Merrick Saile. She was originally married to Nelson (Tony) Royer, with whom she had... View Obituary & Service Information

The family of Theresa M. Bowers created this Life Tributes page to make it easy to share your memories.

Send flowers to the Bowers family.