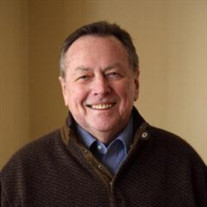 Thaddeus John O’Brien, 89, died peacefully on Friday, February 12, 2021, at home in Bexley, Ohio, surrounded by his family. Thaddeus was born May 10, 1931 in Buffalo, NY to Eugene and Viola (Deluhery) O’Brien and was an older brother to Alice (O’Brien) Evans. He left home at 14 to enter the seminary to become a priest. He studied at Mount Carmel College, in Niagara Falls, Ontario and then studied at the Carmelite novitiate in New Baltimore, PA, where he took vows in the Carmelite Order in 1950. He studied liturgical music at Manhattanville College in Purchase, NY and got his Masters and Ph.D. in psychology from the University of Chicago. During his time as a priest he taught high school. He was also principal at Mount Carmel High School in Chicago and was the Associate Superintendent of the Catholic schools in Chicago, IL. When he left the priesthood at 38, he became an industrial psychologist. His consulting firm, O’Brien & Associates, worked in nearly every major business sector but focused on health care and succession planning with closely held family businesses. He advised CEOs on hiring key roles, building stronger cultures and creating long term strategic plans. Thaddeus also served on a number of civic, hospital and professional service boards including the Quality of Care Committee and HR Committee at Ohio Health. He was one of the founding members of the Conway Family Business Center in Columbus, Ohio. He was a member of the American Psychological Association, The National Association of Sports Psychologists, and The American Society of Clinical Hypnosis. He never really retired but slowed down later in his life to focus on cooking, spy novels, cheering on the Lady Buckeyes basketball team and watching every Cleveland Indians game. He was in the choir at Holy Name Roman Catholic Church, where he started a Gregorian Chant group, and was an active member of Christ the King in Bexley. Thaddeus was a beloved husband to Sharon O’Brien, who he was with for 34 years. He was a loving father to Brendan (Britann O’Brien), Mollie O’Brien (Marco Ramirez), Luke (Erin O’Brien), Dina (Scott Heise), Scott Hacker (Beth Hacker) and Katie Lennon, who may as well be one of his kids. He was the proud grandfather to Elliot, Charlie, Cameron, Sara, Ella, James, Lucy, Rowan, Fionnola and adopted grandpa to Joseph and Harry. If you met him he would tell you none of these facts. He would pay attention to you, ask about your life, and he’d listen to you. He was a man of such quiet charisma that people who met him, even briefly, would ask about him years later. Many people thought of Thaddeus as a father figure who lent a non-judgmental ear and gave kind, incisive advice, and mentorship. Recently he wrote to a friend regarding death, but his words could be speaking to us now: “There are no words to transform sudden, unexpected death and the sorrow that engulfs it. All of life ends incomplete, unfinished - with things still to be said that won’t get said and deeds contemplated that will never get done. I wish there was something I could say or do that could reach beyond your loneliness to give comfort, but I know that is not possible. Empathy sometimes makes us mute and incapable of useful expression.” This week there will be a private service for family. A larger celebration of his life will happen later in the spring. In lieu of flowers, donations can be sent to Catholic Social Services, 197 East Gay Street, Columbus Ohio 43215. (614) 221-5891; https://colscss.thankyou4caring.org/ Care entrusted to SCHOEDINGER FUNERAL & CREMATION SERVICE, WORTHINGTON.

The family of Thaddeus John O'Brien created this Life Tributes page to make it easy to share your memories.