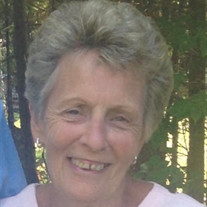 Susan Jane (Parrett) Farquar passed away on January 3, 2021 surrounded by her loving family. She is survived by her husband Roland Keith Farquar, her son Robert (Kristi) Farquar, Daughter Sue Ellen (Timothy) McCarthy, Sister, Shirley (Glenn) Spindler, Sister, Nell Schwantes, Sister In-law Aurdrey Parett and Sister In-law Kathryn Paris as well as her grandaughters Carolyn (William) Eversole and Shelbie Farquar and 5 great grandchildren Shealyn, Kynlee, Ashlyn, Karalyn and Lynlee. She was preceded in death by her Mother, Francis Parrett, Brother Raymond Parrett, Brother Jim Parrett, Sister Mary Parrett, Brother In-law Dale Schwantes and Brother In-Law Tony Paris. Susan was born in Sparta Wisconsin on June 20,1942 to Frances and Raymond Parrett. She attended both Stratford and Marshfield High Schools and graduated in 1960 from Marshfield Senior High. She worked at the telephone company as an operator in Marshfield and Minneapolis. She later moved to Gwinn, Michigan where she met and married Roland in June of 1965. Susan worked for the Bell telephone company at KI Sawyer. In 1972, they moved to the Iron Mountain area where she worked at Brauman Paper company, Krist oil and Daniels House of Gifts. She was an avid bowler and enjoyed being a part of the wash day league. In 1987, they moved back to Gwinn where they built their retirement home on Little Lake. She loved spending time in the sun, having dinner parties, playing cards and traveling to Las Vegas. In 2005, Susan and Roland moved to Columbus Ohio to be near their daughter and son in-law where she enjoyed cooking and baking for her family and friends as well going to the casino and taking care of her kitties Nigel and Missy. A Celebration of Life will be held in Upper Michigan at a later date.

The family of Susan J. Farquar created this Life Tributes page to make it easy to share your memories.

Send flowers to the Farquar family.