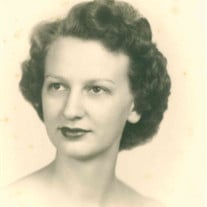 Sue (Brown) VanStavern, a wonderful mother, wife, and friend, passed away peacefully in her sleep on Wednesday, July 28, in the Health Care Center at Friendship Village of Dublin, Ohio, after complications from seizures and declining health. She was preceded in death by her beloved husband Bobby Dale VanStavern in February, 2020, and they both will be deeply missed. A Memorial Celebrating both of their lives will be held at Indianola Presbyterian Church (1970 Waldeck Ave. Columbus, Ohio) at 11 A.M. October 2, with a visiting hour at 10 A.M., officiated by the Reverend Trip Porch, M.Div (with a light lunch served at 12 noon). A private interment will be held at the Worthington Presbyterian Church Columbarium. Born December 29, 1929, in Union, W.Va., Anna Sue Brown grew up in a white clapboard house with strawberries in the yard, a chicken coop, a large garden, and a cellar full of canned vegetables. Living with her parents and older brother Lewis in a small town during the Depression, she excelled in singing and school. As the Valedictorian of her grading class at Union High School, Sue had planned to study music in college, but the sudden death of her father changed this, and she instead went to secretarial school in Bluefield, W. VA. After graduating, Sue worked for a doctor, and soon reconnected with high school friend Bob VanStavern, who she married in 1953. The couple relocated to Columbus, Ohio, for his military training, after which they were to remain for the rest of their lives. Sue took a job at North American Aviation and Bob enrolled in, and later worked for years at, Ohio State University. Sue and Bob worked hard, enjoyed friends, and loved making a home together, and Sue also found great friends and community in her new city and at their OSU university-area church, where she practiced her faith and her music as a long-time member (and a first soprano) at Indianola Presbyterian Church. After years of marriage and her deep longing to become a mother, they adopted their two children and she became a generous and devoted mother, from diapering to volunteering at our schools, as well as sewing, cooking, painting furniture and planting gardens. Our Mom was the creative heart-and logistical maven-of her family, and often said that being a mother was her greatest accomplishment-something that we, her children, cherish. Sue loved long walks in the neighborhood with her neighbor, held several positions at her church, served in the AAUW Choral Group, played handbells, and sang in her church choir, while also being a sparkling hostess and warm friend and honorary mother-figure to many. In her middle late years, when Bob retired and their children were graduated and gone, she and Bob travelled to many States and countries, wintering often in Ft Myers, FLA, and enjoyed going on cruises to Belgium, Scotland, and London. With her expansive heart, clear eye and devotion to detail, Sue was a light in so many people's lives, especially those of her dear grandchildren Zoe and Luke, as well as being a beloved "other mother" to her children's partners, Joe and Catherine. She and Bob spend their last decade in Upper Arlington, OH, and more recently, Friendship Village of Dublin, Ohio, where she made many more friends and was a well-known "birthday card queen." Survived by her daughter Jan (and Joe Rozewski), son Tom (and Catherine Rutter), grandchildren Zoe Rozewski and Luke VanStavern, many beloved nieces and nephews, and many wonderful relatives and friends. She was preceded in death by her father, mother, husband, brother, and several other loved ones. A special thanks to Riverside Hospital and Friendship Village of Dublin for their compassion and care. Sue's life was a blessing to us all, and the day before she died, she said with big love and great difficulty, "tell everyone, goodbye." She was a wonderful, classy woman, and will be greatly missed. A Joint Memorial Service for Sue and Bob VanStavern will be held on October 2 at Indianola Presbyterian Church (1970 Waldeck Ave., Columbus Ohio) with visiting hours at 10 AM, a Memorial Service at 11 AM, with a Light Lunch at noon. In Lieu of flowers, Memorials may be made to the Stratford Ecological Center in Delaware County, Ohio. . Those wishing to sign Sue's guest book may do so here at Schoedinger.com .

Sue (Brown) VanStavern, a wonderful mother, wife, and friend, passed away peacefully in her sleep on Wednesday, July 28, in the Health Care Center at Friendship Village of Dublin, Ohio, after complications from seizures and declining health.... View Obituary & Service Information

The family of Sue VanStavern created this Life Tributes page to make it easy to share your memories.