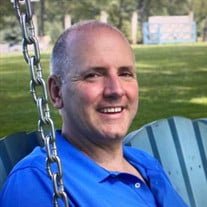 Steven P. Spicer, 59, of Hilliard, passed away unexpectedly into the arms of Jesus on November 30, 2021. Steve was born in Waverly, NY on June 8, 1962, to George and Charlotte Grace (Seaver) Spicer. In addition to his father, he was preceded in death by brother-in-law Dan Davis, sister-in-law Marcia Russell; brother-in-law Frank Smith; and an infant brother. Steve is survived by his mother Charlotte; wife of 25 years Kathy Sarto Spicer; siblings George (Chery) Spicer, Sr.; Susan Davis, Brenda (Tom) Ferguson, and Janet (Steve) Tiffany; siblings-in-law Gary Sarto, Janice (Mike) Hoffbauer, Keith (Diana) Sarto, Stephen Sarto, and Celeste (Joe) Etzkorn; numerous nieces and nephews; and former sister-in-law Kiki Ganz. Steve grew up and worked on the family farm in upstate New York. He graduated from Candor High School and moved to Columbus OH where he attended DeVry University to study Information Technology. He was widely known in the neighborhood when he was Asst. Mgr. at an IGA in Grove City. Soon after, he began a 26-year career with Glazier Wine and Spirits. He started in the warehouse on the night shift, eventually became a day driver, spent time in the IT department, and finally became a customer service supervisor. Steve had a love of computers and video games. He really enjoyed music, and even played a little bit of guitar. He was excellent with kids, and he always had a joke ready. He loved nature, especially in his native state of New York, where on wonderful trips back he would visit Watkins Glen, the Finger Lakes and many other areas. A memorial Service will be held Wednesday, December 8, 2021, at 2PM with visitation beginning at 1PM at SCHOEDINGER DUBLIN, 5980 Perimeter Drive. To view the memorial service online visit https://webcasts.lifetributes.com/1179064 To make contributions to funeral expenses in lieu of flowers, visit https://www.tmcfunding.com/funds/steven-p-spicer-funeral-fund/6230/

Steven P. Spicer, 59, of Hilliard, passed away unexpectedly into the arms of Jesus on November 30, 2021. Steve was born in Waverly, NY on June 8, 1962, to George and Charlotte Grace (Seaver) Spicer. In addition to his father, he was preceded... View Obituary & Service Information

The family of Steven P. Spicer created this Life Tributes page to make it easy to share your memories.

Steven P. Spicer, 59, of Hilliard, passed away unexpectedly into...

Send flowers to the Spicer family.