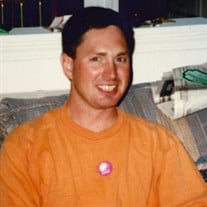 Watch webcast for Steven C. Pond: https://webcasts.lifetributes.com/1103772 Steven Charles Pond, 58 years. Born July 20, 1962 in Columbus, Ohio; Died November 22, 2020 in Columbus, Ohio. Beloved father, brother, son, veteran, neighborhood handyman/auto-mechanic/scare-tactician. He leaves behind his children, Christopher and Katherine Pond; his mother, Maryann Pond; brothers, Robert Jr., Scott, and David Pond; nieces and nephews, Emma, Jennifer, and Sarah Pond, Erin Hiro, Megan Miller, Grant Sugar and Godson Evan Sugar; and the many many incredible, loving friends. There in heaven to greet him are his father Dr. Robert Pond, birth mother Anita Pond and his grandparents, along with his beloved dogs, cats, and rabbit. Steve graduated from Dublin High School Class of 1982. He graduated from Columbus State Community College with an associate degree in Computer Science while working/serving full time in the Ohio Air National Guard serving at Rickenbacker AFB, in the hydraulic shop for the 121st Air Refueling Wing. He was able to fully retire after 20 years of service, receiving an honorable discharge (thank you Larry and Ernie). He worked as an IT Frontline Technician at Columbus State Community College until his death. With the incredible help and guidance from Cleveland Clinic, Steve received a double lung transplant in 2004. Due to their extraordinary abilities, this hospital gave his family and friends an extra 16 years of living and laughing alongside him. We will never underestimate how lucky we all were in this regard. However, because of complications with COVID and the transplant medicines, even with the help of the determined team at Riverside Hospital, his health quickly deteriorated during the last week of his life - ultimately it was too much for his body to cope. In spite of his constant jokes, quick wit and banter, and diabolical pranks, he was never short of giving a helping hand to anyone who asked for it. From basement remodeling to computer issues; from fixing cars, to giving an ear, his shoes will hardly be filled. Over the years he has made scores of friends from childhood to middle age who never, and will never stop caring about him. Steve had this knack to show genuineness and compassion at a level which makes people openly and unconditionally befriend him. However, with ALL of this being said, there will be one aspect of Steve and his life that will endure in everyone's memory. Steve had this inexplicable talent for designing elaborate themes and decorating. Not only could he paint the best Scooby-Doo characters in a bedroom, but he also created embellished birthday parties for his kids, and decorated the outside of his house much in the style of a gingerbread house for Christmas. Though his most elaborate and admired designs and creations belong to his morbid, fantastical Halloween obsession. Ever since staging fake séances, Steve became fascinated in Halloween costumes, prosthetics, gory make-up, and animatronics. Well one day, this man found his calling, honing in all his crafts and skills and became the master of the homemade haunted house. When the family moved to Hilliard, the haunted house was upgraded, filling out an entire front lawn, and become his masterpiece, his magnum opus. And every year it was like this. He terrified every single kid, teen, and adult that walked through. To this end, everyone who knew him can only summarize just how incapable we feel to be able to restore some part of our hearts because the hole he left is simply so broad and large from all the aspects of life Steve seemed to fill. Visitation 10am-1pm Tuesday, December 1, 2020 - limited funeral at 1:00pm @ Schoedinger Dublin 5980 Perimeter Drive Dublin, Ohio 43017. Watch webcast for Steven C. Pond: https://webcasts.lifetributes.com/1103772 In lieu of flowers, please donate to Lifeline of Ohio.

The family of Steven C. Pond created this Life Tributes page to make it easy to share your memories.

Send flowers to the Pond family.