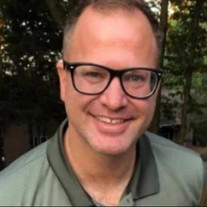 Steven Paul Barton, age 45, of Huntsville, Arkansas passed away Wednesday, September 9, 2020 in Rogers, Arkansas. He was born on Tuesday, June 3, 1975 in Cleveland, Ohio. Throughout his childhood, Steven resided in Aurora, Ohio; Saint Paul, Minnesota; Allentown, Pennsylvania; and Columbus, Ohio. As a youth, he was very active with friends in sports, the Boy Scouts of America, and BMX biking. During high school, he was a member of the ski club and earned varsity letters for tennis and golf. He also developed an interest in restoring cars and began working with his father on his prized 1968 Ford Mustang. Steven graduated with the Gahanna-Lincoln High School Class of 1993 in Gahanna, Ohio. He then attended Kent State University and became a member of the Sigma Chi Fraternity, an organization that afforded him enduring friendships throughout his adult life. Steve transferred to the University of Cincinnati and graduated Cum Laude with the class of 1998, earning a Bachelor of Science degree in Biology. After college, Steven worked for The Proctor and Gamble Company as a Senior Research Associate, The Wm. Wrigley Jr. Company as a Senior Customer Marketing Manager, S.P. Barton, LLC as an Independent Consultant, The Sara Lee Corporation as the Manager of Innovation, CSM Bakery Solutions as the Director of Sales, Ferrero USA, Inc. as the eCommerce Segment Leader, and most recently with the Whole Coffee Company, nudge. as Chief eCommerce. Steve enjoyed many hobbies and pastimes, including hunting, fishing, golfing, skiing, charity biking and running races, and most recently flying. Steven was a student pilot attending flight school in his free time working on attaining his private pilot’s license. One of Steven’s greatest gifts to everyone who knew him was his sense of humor and ability to naturally fill a room with laughter, which will be sadly missed. Steven’s utmost happiness in life came as a result of the births of his daughter, Beatrice and son, Blake. He loved his children immensely and would not hesitate to beam with pride as he shared all of their accomplishments, silly antics, and milestones. He was an active father in their lives, including becoming a “stay-at-home dad” for a period of time, playing with them, coaching them, and cheering them on during sports, musical performances, and dance routines. He traveled with Beatrice and Blake on family adventures, including camping, skiing, resort vacations, and weekend getaways. Steven provided the best lifestyle he could for them, showed them affection, mentored them, and gave them countless experiences during his time with them. Most recently, he enjoyed fishing with Blake and water sports with Bea, but above anything else, he just enjoyed spending time together with his beautiful, intelligent daughter and gentle, talented son. Steven was preceded in death by his maternal grandparents, Anthony and Jane Zmozynski; paternal grandparents, Joseph and Genevieve (“Jean”) Barton; former mother-in-law, Diane Newland; uncle, Jack Rusnak; great-aunt and great uncle, Ted and Mary Gwinn. Steven will be greatly missed by his children: daughter, Beatrice Genevieve Barton and son, Blake Emerson Barton; parents, James and Christine Barton of Pickerington, OH; sisters, Rebecca (Sean) Diehl of Knoxville, TN and Robyn (Scott) Secrest of New Albany, OH; nieces, Audriana Barton and Ryan Secrest; nephew, Samuel Secrest; Jacob and Thomas Newland, and their mother, Christy Newland; aunts, Lori Rusnak and Donna (Michael) Harrison; uncle, Thomas (Jana) Zmozynski; cousins Scott (Maureen) Kelly, Brian (Bobbie) Kelly, Jason (Elizabeth) Rusnak, Natasha (Patrick) Brand, Gregory (Rebecca) Harrison, Alison Zmozynski, and Kevin Zmozynski; good friend, Jason Dorfman; and many other extended family, friends, and colleagues. In lieu of flowers, donations may be made in memory of Steven Barton to National Parents Organization to promote continued, loving parent-child relationships after divorce. Contributions may be sent to National Parents Organization, P.O. Box 590548, Newton Centre, MA 02459 (memo-Steven Barton Memory Fund) or online https://buff.ly/2FnjTzY Additional information about NPO: https://nationalparentsorganization.org/about-npo Arrangements entrusted to Benton County Funeral Home, Inc. in Rogers, Arkansas. Steven’s funeral mass will be Saturday, September 19, 2020 at 12:00 noon at Church of the Resurrection, 6300 E. Dublin Granville Road, New Albany, Ohio 43054. You are welcome to attend in person or view the virtual live streaming at https://www.cotrna.org/ which will provide a link to their Facebook page: https://www.facebook.com/allrwelcom/live_videos/ The family would also like to thank the Kent State University Zeta Lambda Chapter of the Sigma Chi Fraternity for your brotherhood to Steven. “Above all else, guard your heart; for in it are the sources of life.” ~Proverbs 4:23

The family of Steven Paul Barton created this Life Tributes page to make it easy to share your memories.

Send flowers to the Barton family.