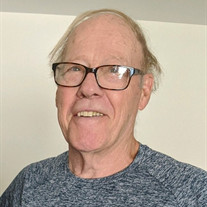 Stephen (Steve) Fredrick Schwartz went to his eternal home to be with his loving Lord and Savior, Jesus Christ, on January 9th, 2022, after battling a long illness. He was born on February 1st, 1946, in Columbus, Ohio. From childhood, his family said he had a terrific sense of humor, of which his family members and friends were often the objects. This joy in life, combined with his passion, devotion, and love for Jesus and his family and friends, was really at the foundation of who Steve was. He was committed to spreading the truth of salvation and eternal life through Jesus Christ. Steve worked for Cincinnati Insurance Company for almost forty years as a multi-peril claims adjuster. He was known for his quick wit and calm, honest demeanor and always being helpful and fair. He loved working on his home and in his workshop, and he had quite the skill for woodworking. In his retirement, he worked closely with his youngest son and formed Schwartz Handyworks, where he touched many of his customers' lives with his godly example while also fixing their homes. He was always working on a project and never slowed down, despite the multiple physical ailments he was battling. He was always an inspiration to all who knew and loved him. Like our Heavenly Father, anyone who knew Steve would say he was the same yesterday, today, and tomorrow. He had a steady presence and was always there for anyone who needed him. His commitment to his family, especially to the love of his life, his wife Carol Ann, who so adored him, was unwavering. His face would noticeably brighten when spending time with his loved ones - and also by the taste of his favorite foods. Steve was preceded in death by his parents, Albert and Emma (Hunter) Schwartz, and his brother, Terry Schwartz. He is survived by his loving wife of over forty-one years, Carol Schwartz, of Gahanna, OH; sons Steve (Regina) Schwartz; Matthew (Savannah) Schwartz; daughter Rebecca Ware (Kyle); grandchildren Allie (Alex), Anna, Jaiden, Colton, and Kylie; sister Penny Hunter; brother-in-law Don (Connie) Gilbert. Visitation will be at Schoedinger Funeral Home, 1051 East Johnstown Road, Gahanna, on Sunday, January 16th, 2022, at 2-4 pm and 6-8 pm. A celebration of life service will be held at the same location on Monday, January 17th, 2022, at 11 am. In lieu of flowers, donations made be made to the Central Ohio Fellowship of Christian Athletes or InTouch Ministries in Atlanta, Georgia.

Stephen (Steve) Fredrick Schwartz went to his eternal home to be with his loving Lord and Savior, Jesus Christ, on January 9th, 2022, after battling a long illness. He was born on February 1st, 1946, in Columbus, Ohio. From childhood, his family... View Obituary & Service Information

The family of Steve Schwartz created this Life Tributes page to make it easy to share your memories.

Stephen (Steve) Fredrick Schwartz went to his eternal home to...

Send flowers to the Schwartz family.