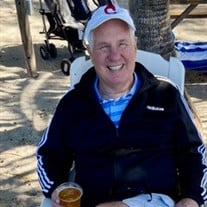 Stephen "Steve" Eschleman died on September 4, 2021 after a life well-lived in joy, lifelong friendships, and love. Steve was born February 11, 1944 in Columbus, Ohio, the middle child of Helen (Carpenter) and Edward Eschleman. He graduated from North High School in 1962 and The Ohio State University in 1966. Steve began his accounting career at Price Waterhouse in Cleveland. Six months later he was drafted and served in the United States Army at Fort Lewis Washington, assigned to the Finance and Disbursing Center. After his discharge in 1968, Steve returned to Columbus, resumed his career at Price Waterhouse, and earned his CPA designation. In 1970, he entered corporate financial management and, until his retirement, served as what he described as, not a Controller or Chief Financial Officer, but rather just the "financial guy" for a number of commercial real estate development, manufacturing, and construction companies in Central Ohio. Steve will be remembered as one of the "really good guys." A man of integrity and strength, he did not have it in him to say an unkind word about or to another person. Although he was also a reserved man who did not like to draw any attention to himself, his ever-present smile put strangers and friends at ease the moment he walked into a room. His humor and quips came out of nowhere but were never at anyone's expense. Tennis was a source of tremendous joy throughout Steve's life after college. As much as the game itself, he loved the camaraderie, lifetime friendships, and wonderful memories the sport gave him. Working for Bonner Enterprises in the early 1970's, Steve held the unique title of being the first to play on the courts at the Continental Athletic Club (CAC) before the facility was open to the public. Steve's closest friends were made over matches won and lost, cold beers, and serious discussions during NFL and NCAA basketball pools. Most recently, he was a proud member of the Golden Buckeyes, playing doubles twice a week at Wickertree Tennis Club. The simplest pleasures in life also brought great joy to Steve: Friday night dinners with close friends, his annual birthday week in Florida, and good key lime pie. A creature of habit, Steve was well known for oatmeal breakfasts at Bob Evans, pasta with meat sauce, and disdain for mushrooms and any food that came from the sea. He was as easygoing as they come and always up for any adventure, provided he did not have to plan it. Steve cherished playing euchre with his sister and brother-in-law to determine who would be crowned "grand champion of the world." Marvelous memories were made during many hiking vacations with his brother and sister-in-law when each day would end with "beer 30." Steve is survived by his wife, Lisa. Steve and Lisa's story is literally one of love at first sight. They met at a 50's costume party at Murphy's Party Barn in November 1988, were engaged over Mai Tai cocktails at a tiki bar on Vanderbilt Beach, Florida in February 1989, and married on November 18, 1989. While certainly a whirlwind courtship, Steve and Lisa not only brought out the best in each other, but they also could poke a bit of fun at each other, because it was based on a deep foundation of love and respect. Lisa was quick to remind others that she certainly "got the better end of the deal" when she and Steve married. Together, they found great joy in traveling and Steve was always ready to go on the next trip, no matter where Lisa decided they should go. Steve is survived by his brother, Dick (Kathy) Eschleman, Sonoma, CA, sister Mary Eschleman (Rich Gomez), Dublin, OH, brother-in-law John Leavitt (Johnni), Newburgh, IN and nieces and nephews, Brian Eschleman, Placerville, CA, Kris (Matt) Wilson, Lafayette, CA, Kate (Mike) Kelly, San Rafael, CA, Megan Leavitt, Newburgh, IN, and seven great nieces and nephews, a host of cousins, and friends who will always be family. On Monday, September 20, 2021, following a private family chapel and graveside service at Flint Cemetery, friends and colleagues are invited to join the family to raise a glass and celebrate Steve's life at a reception at VASO Dublin, 6540 Riverside Drive, Dublin, Ohio from 3:00 p.m. to 6.00 p.m. In accordance with Steve's wishes, in lieu of flowers, donations may be made in his honor to the Steve and Lisa Eschleman Fund at the Columbus Bar Foundation. Donations may be made directly through the Columbus Bar Foundation website https://cbfdonations.square.site/existing-cbf-funds or by check made payable to the Columbus Bar Foundation, 175 South Third Street, Suite 1100 Columbus, OH 43215. (In the memo section, please note: Steve and Lisa Eschleman Fund in memory of Steve Eschleman).

The family of Stephen "Steve" Eschleman created this Life Tributes page to make it easy to share your memories.

Send flowers to the Eschleman family.