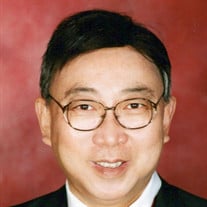 To view the webcast livestream at 10am EST, please click here: https://webcasts.lifetributes.com/1187421 With profound sadness, we announce the passing of Stephen Songsheng Chen, a beloved husband, caring father, patriarch of Chen’s extended family, and friend and benefactor to many whose lives he touched, on January 9, 2022, after gracefully confronting stomach cancer for the past 8 months. He was 82 years old. Stephen is survived by his wife and high school sweetheart, Yuying Meng, their two sons, David and Leighton, and two grandchildren, Michael and Matthew. He was born on August 3, 1939, in Beijing, China to Chen Pinzhi and Fu Junying. He received primary and secondary education from the renowned YuYing School, founded by the American Christian Congregational Church, where he was given his English name, Stephen. He graduated from Beijing Foreign Studies University majoring in English, only to become an engineer after college. As the son of a Rightist father who was also labeled Capitalist and Landlord, Stephen was persecuted in China during the infamous Cultural Revolution, sent to a re-education camp for years, and away from his wife and newborn son. Later, he took a chance and came to the United States, where he found a new life. He became an early pioneer of US-China businesses developments, negotiated the first US-China joint venture, the Beijing Jeep, on behalf of American Motors, then led General Motors and United Technologies/Otis Elevators through major business expansions in China and Asia, and created, invested in and managed numerous family-owned businesses. A lifelong fan and recognized amateur performer of the Peking Opera, Stephen performed on-stage with many renowned masters of Peking Opera, and his performances have been well recorded and preserved. He was also an accomplished player of Erhu, a two-stringed musical instrument used for Peking Opera, and would often sing and play for hours. Stephen turned his focus to writing after his retirement and published several books in English and Chinese, such as the Red Circle, using the colorful historical events experienced by his father and himself as the backdrop. He received wide acclaim and awards for his efforts. Most of all, he loved his family and instilled in his sons strong values that have served them well. He will be dearly missed and forever in our hearts. A celebration of Stephen’s life will be held at Schoedinger Funeral Service, 5890 Perimeter Dr., Dublin, OHIO 43017 on Saturday, January 15, 2022 beginning at 10 a.m.

The family of Stephen Songsheng Chen created this Life Tributes page to make it easy to share your memories.

To view the webcast livestream at 10am EST, please click here:

Send flowers to the Chen family.