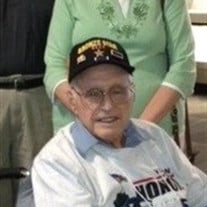 Stanley C. Pratt, 99, of Lewis Center, passed away on June 30, 2021, surrounded by his family. Stan was born on March 3, 1922, in Nunda, New York to the late Charles and Gertrude (Gormel) Pratt. In addition to his parents, Stan was preceded in death by his wife, Madelyn Pratt and his sisters, Marion Bopp and Arlene Kercher. Stan moved with his parents to Dayton, Ohio at an early age where he completed his education and entered into his long professional career with General Motors, retiring as a foreman with GM's Dayton-based Delco Moraine division in 1980. One of Stan's many acquaintances while living in Dayton was Orville Wright who met Stan when Stan was working as a teenager at the Dayton Engineer's Club and helped Stan with his math homework. During WWII Stan served first with the Second Armored Division and then the Seventh Armored Division fighting his way across Europe while surviving a sniper's bullet to his helmet, a bayonetting while defending his foxhole, a capture and then escape from the enemy, and finally being blown from his tank by an enemy shell while on patrol. As a member of Company B of the 38th AIB, Seventh Armored Division, Stan participated in the valiant defense of St. Vith Belgium against overwhelming enemy forces during the Battle of the Bulge, action that earned his unit a Presidential Citation. Individually Stan earned two Purple Hearts and a Bronze Star. After convalescing from his war injuries, Stan returned home to Dayton with a reconstructed knee and a body full of shrapnel that he carried for the rest of his life. There he met his beloved wife Maddie and raised a wonderful and successful family. Along the way Stan and his family took up boating as a hobby and Stan was proud to still be water skiing at 70. Stan also was very good with his hands, constantly volunteering to fix things for friends and family, tinkering with cars, building additions to his home, crafting play items for his daughters and granddaughters and constructing a hydroplane for his son. Stan and Maddie got involved in square dancing that ultimately led them to move to Harlingen Texas as part of a square dance community. There they made many dear friends and lived until 2001 when triplet grandchildren were born. Wanting to help out in caring for the kids, Stan and Maddie moved to Lewis Center to be nearby the triplets' Westerville home. Vowing to keep his promise to Maddie that he would live to see his grandchildren graduate, Stan continued on in Lewis Center after his wife's death in 2011, active as ever until his old reconstructed knee failed him in his late nineties and he became wheelchair bound. Even then he bore his handicap with grace and strength until death finally claimed him. Stan will be greatly missed by his children, Larry (Debbie) Pratt, Kathy (Chuck) Rippin, and Barb (Steve) Strome; grandchildren, Korin (Mac) Dunford, Erin Strome, Brianna (Bartosz) Soltys, Natalie Rippin, Jon Pratt, Michael Pratt, and Danielle Pratt; great-grandchildren, Kaia and Kenzie Dunford; sister Irma Harsh, nieces, nephews, and extended family. A family graveside service and a Celebration of Stan's Life event for friends and family will be announced at a later date.

Stanley C. Pratt, 99, of Lewis Center, passed away on June 30, 2021, surrounded by his family. Stan was born on March 3, 1922, in Nunda, New York to the late Charles and Gertrude (Gormel) Pratt. In addition to his parents, Stan was preceded... View Obituary & Service Information

The family of Stanley C Pratt created this Life Tributes page to make it easy to share your memories.

Send flowers to the Pratt family.