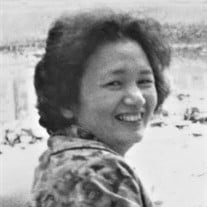 Shun-Hwa Chen Liu, age 91, of Gahanna, OH, passed away on December 14, 2020. She is survived by her children Huei-Nin Liu-Johnson of Gahanna OH, Chao Ping Liu of Columbus OH, Su-Nin Liu-Stenger of Washington NJ, and 5 grandchildren, Ashley and Brennan Johnson, and Rebecca, Daniel, and Elisha Stenger. She was preceded in death by her loving husband Su-Yung Liu. She was born in the city of Tainan, Taiwan to Chin-Chi Chen and Hao Huang Chen. Growing up as the middle child among three sisters and three brothers, she was regarded by the elders as "the respectful one" who was thoughtful, giving, and a peacemaker, for which she was dearly loved, but she would at times "step out of character" to speak up for herself or defend others by presenting reasoned and sound arguments without opening herself to disciplinary action for being disrespectful. She had a quiet and playful sense of humor and enjoyed the company of family and friends. She loved to read and had a natural talent for fine arts. She obtained a BS degree in architecture from National Cheng Kung University, one of the top universities in Asia known for its engineering and technology disciplines. She was the only female student in her class of the architecture department. She graduated second in her class. After college, she taught high school math at an all-girls' school and absolutely loved it. She then worked as an architect for a construction company before she married Su-Yung. She became a devoted wife and mother and traveled with Su-Yung to wherever his career took the family, including the small town of ChaoZhou and the capital city of Taipei in Taiwan, followed by El Salvador, Nicaragua, and Brazil. She had the opportunity to learn two new languages, Spanish, and Brazilian Portuguese, to add to the other languages she knew, including Taiwanese, Mandarin Chinese, and Japanese. She spent a good part of her day reading books and news articles, socializing with local friends, and corresponding with far away relatives and friends. She applied her architecture and construction background to home improvement and extended her aptitude to hobbies including fashion design and clothing construction. Other hobbies and activities included gardening, gourmet cooking, travel, and volunteering for UNICEF and local charities. At age 75, Shun-Hwa came to Gahanna, Ohio with Su-Yung to live closer to their children. They lived in an apartment at The Worthington, an independent living community in Gahanna where they enjoyed social, recreational, and fitness activities and field trips to local attractions and parks. Shun-Hwa joined the Sunrise of Gahanna assisted living community in December of 2015, two years after Su-Yung's passing. Coming to terms with her loss and leaving behind a familiar environment which she had shared with her beloved husband was a sad time for a while, but she was well cared for and enjoyed her last years at Sunrise of Gahanna. In lieu of flowers, memorial donations can be made at unicef.org.

The family of Shun Hwa C. Liu created this Life Tributes page to make it easy to share your memories.

Send flowers to the Liu family.