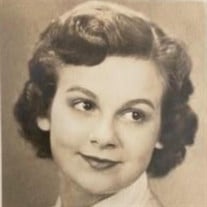 Shirley M. Walters passed away peacefully on September 21, 2021. Shirley was thoughtful, conscientious, and independent until the end, never wanting to burden anyone, even her children. Born in Athens, Ohio in 1931 to Betty Ondrik and Ralph L. Miller, Shirley attended Ohio University and Ohio State University, graduating with a degree in Elementary Education. After marrying Jack D. Walters, they started their family in Europe due to his involvement with the Army Reserves Corp of Engineers. Shirley and Jack lived the majority of their lives in Dublin, Ohio where they raised their children, Mitzi Walters, Kris Sitarski (Dave), Liz Essig (Greg), Jenny Kizer (Bill), and Karl Walters. Shirley also has 14 grandchildren and 6 great grandchildren who remember her with great fondness. In addition, Shirley is survived by her brother Ralph L. Miller Jr. of Bethesda, Maryland. Prior to surviving cancer, Shirley never took a sick day, who has time for that? She was very active throughout her life, physically and through various positions she held. Shirley raised five strong and independent children and instilled in them her values. Shirley gave back to her community through her involvement with the Franklin County Board of Elections, Washington Township Community Development Committee, Columbus Museum of Art’s Beaux Arts, Alpha Xi Delta House Board President, Dublin Historical Society, and managing Jack’s architectural firm while raising their children. Shirley led a very determined life, taking much value in her hard work and accomplishments, but never talking about them. Shirley felt strongly about respecting the earth, recycling, conserving, and reducing. Her love for nature and every creature was evidenced by her houseful of animals and her adoption of retired greyhounds from the racetracks in Florida. Shirley’s talent for re purposing antiques was ahead of its time, and she will fondly be remembered in her pickup truck full of antiques along with her dogs. A private family celebration of life will be held, and the family greatly appreciates the support of so many. In lieu of flowers, memorial contributions in honor of Shirley's devotion to animals may be made to Columbus Humane located at 3015 Scioto Darby Executive Ct., Hilliard, OH 43026 or via their website at www.columbushumane.org.

Shirley M. Walters passed away peacefully on September 21, 2021. Shirley was thoughtful, conscientious, and independent until the end, never wanting to burden anyone, even her children. Born in Athens, Ohio in 1931 to Betty Ondrik and Ralph... View Obituary & Service Information

The family of Shirley M. Walters created this Life Tributes page to make it easy to share your memories.

Send flowers to the Walters family.