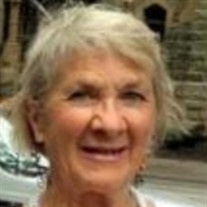 Shirley Christine Jones Ackley, age 87, slipped away peacefully September 30, 2021 with her husband holding her hand. Shirley was born in Abilene, Texas on September 8, 1934, the daughter of Barbara Christine McElreath Jones and Hugh Anson "Kacy" Jones. She moved from Texas to Columbus, Ohio with her parents and her baby sister, Babs, where her father established Kacy Jones Potato Chip and Frito Columbus Co. Shirley graduated from Bexley High School and attended Smith College, leaving after her sophomore year to elope with the love of her life, Timothy Wallace Ackley. Together they moved to a farm in Radnor, Ohio where they raised their five children and completely immersed themselves with life in the country on a working farm and the busy bustle of their children's activities: milking the cow, birthing lambs and hauling grain wagons, numerous school sports and cheerleading, 4-H livestock and horse shows, school fundraisers, volunteering in the school library, tutoring children, and always filling in where there was a need. In one of Shirley's published writings she said, "We all grew there on The Farm together, Tim and I and the children, working and playing and dreaming. I was doing all the things that women do - good things - making a home, keeping house, gardening, cooking, canning, cleaning, changing diapers, reading Mother Goose, volunteering (Red Cross, United Way, Junior League, typing braille for the blind), running school committees, chauffeuring small people." When their last child went off to college Shirley decided she too would complete her college education. So at the age of 52 she returned to Smith College in Northampton, Massachusetts and earned her degree in English Literature. She had a year beyond her expectations: full of independence, serious intellectual experiences and new life long friends who brought extra richness to her life. Shirley was an avid reader and a life long learner. She was a great believer in the power of education and encouraged her children and all of their school mates to continue with their education and to "read read read!" Shirley was a member of the Junior League of Columbus, the Smith Club of Columbus and The Mary Ritter Garden Club. She served on the Board of Directors of the Delaware County Library and The Delaware County Cultural Arts Center. She was also forever a Campfire Girl. Shirley was a writer and gardener and loved to dance. She was the original hostess of many epic family Thanksgivings and the piano player for family Christmas parties; she was amazingly adept at rolling with the chaos. She cherished every moment with family and friends, including sister Babs and late husband Jim Thorson, brother-in-law Stan Ackley, and sisters-in-law Jane Ackley and Angela Miles-her close confidantes. Shirley was a determined protector of trees and the natural world. She and Tim loved getting in the car and heading off on meandering adventures which led her mother-in-law to say, "well they're just like gypsies aren't they?" And every summer was spent on their beloved tiny KeeWayDin Island in Hessel, Michigan with all of their children and grandchildren, the pride and joy of her life. Shirley was a gentle spirit who thought first of others rather than herself. She was nurturing and all inclusive and often had an extra child living in their house, one that needed a little extra love and patience and positivity, all of which she was full of. She believed in the goodness of mankind and that love could conquer all. Shirley is survived by her husband of 67 years: Timothy Ackley; children Steven (Elizabeth) Ackley, Benjamin (Heidi) Ackley, Holly (Steve) Wittmann, Hannah (Bruce) Yuhas, and Lucy Ackley (Robert Collier). She was "Muzzy" to her twelve grandchildren (and their friends), Gus, Joanie, and Annie Ackley; Halli and Peter Ackley; Sam and Caroline Wittmann; Riley, Kacy (Polly Ukrop), and Timmy Yuhas; John (Gabriella) and Katherine Philips; Bo and Caroline Collier; and her dear sister, Babs Thorson, sister-in-law Angela Miles, brother-in-law Stan (Jane) Ackley, and many nieces, nephews and Ackley/Thorson/Miles/Kirk family members whom she loved with all her heart. Along with her parents, she was preceded in death by infant son Joseph Timothy Ackley. Shirley once wrote, "My mother said life is not all roses. But my life has been like a rose garden. Every now and then a thorn pricks my finger, calling attention to the beauty, telling me not to take it all for granted." Together, Shirley and Tim did live a life full of moonlight and roses. A private celebration of her magical life will be held at a later date. In lieu of flowers, contributions may be made in memory of Shirley Jones Ackley to Smith College (Northampton, MA), Delaware County District Library (Delaware, OH), Les Cheneaux Community Library (Cedarville, MI), Columbus Museum of Art (Columbus, OH), or the charity of your choosing. Arrangements entrusted to SCHOEDINGER NORTHEAST. www.schoedinger.com.

The family of Shirley Ackley created this Life Tributes page to make it easy to share your memories.

Send flowers to the Ackley family.