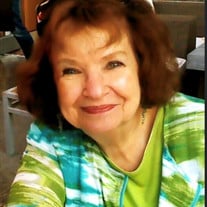 Once on the far side of yesterday there was an exceptionally pretty girl with a sense of beauty, fashion, and love. She lived a life that was rich in friends, filled with a loving family, and more accessories than anyone could inventory. This... View Obituary & Service Information

The family of Sharon King Sullivan created this Life Tributes page to make it easy to share your memories.

Once on the far side of yesterday there was an exceptionally...

Send flowers to the Sullivan family.