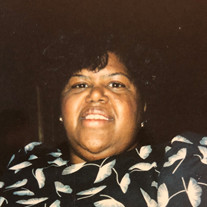 Sharon Diane Saunders, 67, formally of Urbancrest, Ohio, fought a good fight, finished the race and kept the faith. (II Timothy 4:7) and she entered eternal rest peacefully, Friday May 14, 2021 at Mt. Carmel East Hospital, Columbus, Ohio surrounded by her friends and family. She was preceded in death by parents William and Henrietta Saunders. Left to cherish her memory is her one and only daughter Carla Cne Saunders; and many beloved family and friends. Sharon was raised in Urbancrest, Ohio. She was baptized in Jesus name and filled with the Holy Ghost at an early age at Bethel Apostolic Church. Sharon graduated from Grove City High School and attended Paul C. Hayes Tech school, where she studied data processing, after high school, Sharon worked for The State of Ohio for 30 years. She came to Ohio Department of Mental Health Office of Information Services (OIS) in from the Auditor of States office. There, she was the Production Control Manager. Her motto was “work smarter not harder” and to that end she helped implement changes that kept her section relevant as technology advanced. She used her entrepreneurial and culinary skills to help OIS win many a competition to raise money for various charities. Her most popular adventure was Hogan’s Heroes, the annual sub sale, that raised hundreds of dollars. She was also on many committees one of which was to promote OIS which produced an annual Christmas card. Sharon also elevated OIS Christmas party to be the envy of the whole department. Sharon was the owner of Three Babes and a Baker where she catered events at venues such as the Franklin Park Conservatory, Lincoln Theater, and Palace Theater where she hosted the Valentine’s concert with the Chi-lites and the Whispers. Sharon had a passion for cooking and baking. She catered monthly events for businesses such as Wal-mart. She also catered events for Mayor Mike Coleman, one such event was when Columbus hosted the UniverSoul Circus for the first time. Always looking for the next business opportunity in 1999, Sharon, along with some of her co-workers, entered the Columbus Jazz and Rib festival where they won Best Hometown Favorite! Sharon was also an avid football fan and enjoyed playing fantasy football and hosting Superbowl parties. She was also a great storyteller. She had a story for every occasion she could make you cry with laughter but there was always a lesson to share. She loved and cared so much for her community and served multiple terms as a Council Member for the Village of Urbancrest and volunteered at Vaughn E. Harrison YMCA. She worked to improve her hometown and hosted annual block parties and always attended the National Black Mayors Conference yearly. Sharon was a joyful presence in people's lives and will be deeply missed by countless friends and family. She was wise, protective, and no nonsense. Sharon’s family will receive friends from 11a.m. - 12 p.m. Saturday, May 22, 2021 at Schoedinger Grove City, 3920 Broadway, Grove City, Ohio 43123. Funeral will begin promptly at 12 p.m. District Elder Richard A. Lyles officiating. If you are not able to attend in person, please visit https://cutt.ly/pb1PD1p to watch her funeral service. Webcast link will be live 5 minutes prior to 12 p.m. Masks are required to be worn and social distancing observed also kindly refrain from hugging in an effort to follow CDC guidelines. Visit www.schoedinger.com to share a special memory or extend condolences.

The family of Sharon Diane Saunders created this Life Tributes page to make it easy to share your memories.

Send flowers to the Saunders family.