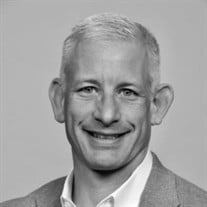 Scott Michael Knaul, of Westerville, Ohio, passed away suddenly on August 27, 2021. He was born at Camp Lejeune Naval Hospital in North Carolina on June 1, 1971, to Gary and Linda Knaul. Scott attended Gahanna Lincoln High School where he found his passion for wrestling and graduated in 1989. He went on to attend Miami University where he received his marketing degree in 1993. He was a member of Miami University's wrestling team and a very proud member of the Delta Chi Fraternity. Scott took pride in his love and passion for the retail industry holding various corporate retail roles and most recently was the Executive Vice President for the Retail and Hospitality team at Workforce Insight. In his spare time, he had a love for Mixed Martial Arts and was a brown belt in Brazilian Jiu Jitsu. In 2017, he won the title of Heavy Weight World Champion. He also had a love for anything and everything Disney and visited the Disney Parks as often as he could. Scott had a positive impact on everyone he met and had a wide network of friends. His joy for life was contagious and he will be deeply missed. Scott is preceded in death by his brother, Kevin Knaul; and grandparents, Lewis and Phyllis Knaul and Ermin and Mary Schwade. He is survived by his daughters, Victoria Knaul and Abigail Knaul and their mother, Ilisa Knaul; parents Gary and Linda Knaul; sister, Amy (Rick) Simons; sister-in-law, Tiffany Knaul; nieces and nephews Jake Simons, Payton Simons, Emily Knaul, and Carter Knaul; and many aunts, uncles, and cousins. Scott is also survived by his very special friend Jamie Sommerfeld and her daughter Noelle Sommerfeld. Family will invite friends to gather on Saturday, October 16, 2021 from 2pm to 4pm at SCHOEDINGER NORTHEAST FUNERAL HOME, 1051 E. Johnstown Rd., Gahanna. In lieu of flowers, donations may be made in Scott's name to the Gahanna Lincoln High School ATTN: Athletic Department - Wrestling Team, 140 S. Hamilton Rd., Gahanna. Please note on memo line: Wrestling Team.

The family of Scott Knaul created this Life Tributes page to make it easy to share your memories.

Send flowers to the Knaul family.