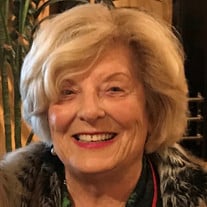 Sandra Kay Willison, 79, of Columbus, passed away peacefully on October 18, 2020 at Mt. Carmel East Hospital. Her family was by her side at the time. Born in Lancaster, OH on March 23, 1941, she was preceded in death by her parents Wesley Cyrus and Margaret K. (Lenz) Kisor. In addition to her parents, she was preceded in death by her sister Patricia Garbett. Kay is survived by her husband of 58 Years, Richard "Dick" Willison; children Rande Willison, Debbie (Ken) Williams, Chris Willison, and Nathan (Jessica) Willison; grandchildren Mary-Claire, Kisor, Pax, and Cecilia Willison; and sister Vickie Shaffer. Kay spent her life in service to others. First and foremost, Kay was a wife and mother. She was deeply devoted to her husband, children and grandchildren. She often said that her children gave her purpose in life. She was a firm but loving mother, she laughed remembering a time she gave her kids pie after having sent them to their rooms. She also gave as a nurse, receiving her RN from Riverside White Cross and her bachelors degree from Ohio University. She spent her career working as a school nurse at St. Rose and New Lexington Schools before retiring from Columbus Public Schools. Kay always went the extra mile for her students, often giving out of her own pocket rather than seeing a child go without. Kay was a woman of faith and her daily acts of kindness were a testament to her beliefs. She was an example to her kids and grandkids and those around her of what being a Christian meant. She lived with a sense of thoughtfulness. She was also an optimist, always finding something positive even during the most challenging of times. She lived life with vigor and a sense of adventure. The kids joked that if there was a tornado, mom would be out trying to find it. She was also a writer, often sending handwritten notes and letters to her children. Her tradition of giving the grandkids Christmas letters each year was a source of great pride to her. She made every situation and environment that she was in fun. Kay was the type of person that benefited anyone she came in contact with. She was an uplifter, she was a doer, she was loving, she was honest, she was supportive, she was nurturing, and she was a rock. The family would like to extend a special thank you to the Medical Intensive Care Unit of Mt. Carmel East for putting their lives on the line to try to save her life. The family will hold a visitation at SCHOEDINGER NORTHEAST, 1051 E. Johnstown Rd., Gahanna on Thursday, October 22, 2020 from 4-7PM, where a funeral will be held Friday at 10:30AM. Interment will follow at Mifflin Cemetery. In lieu of flowers, the family asks that memorial contributions in Kay's name be given to The National Kidney Foundation at https://www.kidney.org/ .

Sandra Kay Willison, 79, of Columbus, passed away peacefully on October 18, 2020 at Mt. Carmel East Hospital. Her family was by her side at the time. Born in Lancaster, OH on March 23, 1941, she was preceded in death by her parents Wesley... View Obituary & Service Information

The family of Sandra Kay Willison created this Life Tributes page to make it easy to share your memories.

Send flowers to the Willison family.