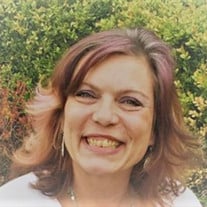 Sandra "Sandy" Ann Ables, 53, of Columbus, Ohio found her way to heaven on September 30, 2020, due to injuries sustained during a traffic accident. Sandy was born to Richard and Joyce Ables, July 11, 1967 in Monterey Bay, California. Friends and family knew Sandy as rock-star, a bohemian princess, and a free spirit. Sandy loved to love and she appreciated the small things in life; rather it be dancing in the rain with her grandchildren or making shadow puppets; she lived to make them smile. Sandy was spontaneous and wild. She always wanted to experience every opportunity that life had to offer and never wanted to wait for the next adventure; she packed a lifetime's worth of memories into her 53 years. She loved the thrill of thrift store shopping; it was always an epic quest for her to find the tackiest couture. Sandy had a love for salty foods, cold and fizzy soda, and anything soft or fuzzy. She was notorious for singing along to songs that she didn't know the words to, killing houseplants, and burning popcorn. She had an irrational fear of chickens and a passion for fantasy. She loved fairies and gnomes, witches and dragons, and scary movies were her favorite. Sandy loved to dye her hair, paint her nails an obnoxiously bright color, and listen to 80's hair bands cranked up to 11. Sandy was a friend to all because her heart knew no boundaries. She always had an open door and an open heart to others in need because she understood the struggle. Sandy did not judge others because she, herself, understood how a past mistake could haunt you. Instead, she accepted people and loved them immensely. She was unequivocally and unapologetically herself. She will be missed beyond words. She is survived by her parents Richard and Joyce Ables, her grandfather Douglas Gray, her aunt Daphne Gray, her siblings Richard (Karrie) Ables, Brenda (Jason) DiGiannantoni, and David (Lucia) Ables; her children Charity (Jonathan) Stoehr, Michael (Shelby Bravard) Kinder, Christian Rader, and Edward Gilman; her grandchildren Atticus and Avada Stoehr, and Arya Kinder. Her cousins, George (Allison), Chase, and Olivia Gray; Nieces and Nephews Anthony (Diana and Gianna), Alec, Addison, Aubrey, and Esther. Lastly, her Honey, Shane Siddell, and her life-long friends Cathy Linger, Janis, Kelly, Mary Kinder, Lucinda Bias, Patsy Cooper, and Lisa Blanton. She was preceded in death by her maternal grandmother Jean Gray, her former mother in law Mary Lou Kinder, her former brother in law and friend, Ron Kinder, and lastly her fur babies Fonzi and Egbert. A Memorial Celebration of Sandy's Life will be held Wednesday, October 7, 2020 from 3-5pm at Blacklick Metro Park in the Ash Grove Area. Friends and Family are encouraged to join, to honor Sandy for the beautiful soul she was. Arrangements entrusted to Schoedinger East Chapel.

Sandra "Sandy" Ann Ables, 53, of Columbus, Ohio found her way to heaven on September 30, 2020, due to injuries sustained during a traffic accident. Sandy was born to Richard and Joyce Ables, July 11, 1967 in Monterey Bay, California. Friends... View Obituary & Service Information

The family of Sandra Ann Ables created this Life Tributes page to make it easy to share your memories.

Send flowers to the Ables family.