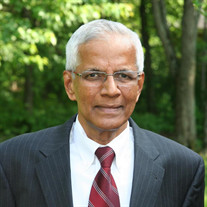 Samy Veluchamy, age 80, passed away peacefully on Friday, December 3, 2021, at home with his family at his bedside. He was born on January 20, 1941, in Ramalingapuram, Tamil Nadu, India. He was the youngest of the four children of Ayyammal and Venkitasamy. Samy earned a BS degree in Engineering in 1963 from the Government College of Technology in Coimbatore, India. In 1966, he completed an MS degree in Engineering at the Guindy College of Engineering in Chennai, India. He married his beloved wife, Rukmani Gopalakrishnan, on July 4, 1966. He was then an assistant professor at the Regional Engineering College in Trichy, India from 1967 to 1970. His daughter, Indira Devi, was born in 1967. Samy and his family immigrated to the United States in 1970. He earned an MS degree in Electrical Engineering from Villanova University, and then worked as a medical electronics engineer at Thomas Jefferson University Hospital until 1974. Soon after, Samy commenced PhD studies at Case Western Reserve University, continued these studies at the Ohio State University, and eventually completed his PhD in Biomedical Engineering in 1980 through Columbia Pacific University. In 1976, Samy and his family moved to Columbus, Ohio, which became his home for 45 years. He began a position as the director of biomedical engineering at Mount Carmel Medical Center and over time, rose to a senior management position as a corporate vice president. In 1996, Samy left Mount Carmel to focus on providing private management consulting services to local hospitals. In 2001, Samy became vice president of clinical services at Bucyrus Hospital. Samy returned to private consulting in 2005 and founded the Global Health Reach Group, which offered consulting services to Asian-Pacific hospitals. After retiring in 2010, Samy published a book called "The Incredible Human Machine," which is a patient's guide to navigating the health care system. Samy will be greatly missed by his wife of 55 years, Rukmani; daughter, Indira and son-in-law, Kanny; and grandsons Nicholas and Marcus; and by so many members of his extended family in the USA and abroad. Visitation will be held from 10 AM-11:30 AM on Sunday, December 12, 2021 at SCHOEDINGER MIDTOWN, 229 E. State Street, Columbus, Ohio 43215, where a Private Family Service will follow.

Samy Veluchamy, age 80, passed away peacefully on Friday, December 3, 2021, at home with his family at his bedside. He was born on January 20, 1941, in Ramalingapuram, Tamil Nadu, India. He was the youngest of the four children of Ayyammal and... View Obituary & Service Information

The family of Samy Veluchamy created this Life Tributes page to make it easy to share your memories.

Send flowers to the Veluchamy family.