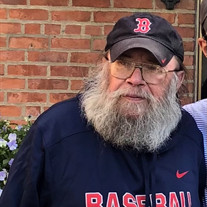 Samuel E. Marcellino Jr., passed away on July 6, 2021, at the age of 83. Sam was born on May 31, 1938, in Boston, Massachusetts to Samuel and Katherine Marcellino. Sam was a self-described drifter, but to friends and family he was a Renaissance man. After graduating from Milton Academy, and a brief stint at Trinity College, Sam enlisted in the U.S. Air Force where he served as a translator. After the military he graduated from the University of Massachusetts, going on to obtain his Masters in English Literature from Harvard University, and his Juris Doctor from Boston College. Sam met his wife, Lynn, at Harvard and they married on June 11, 1973. They were happily married for 41 years until her passing in 2014. They adopted their son in 1987 and shortly after opened a health food store to spend more time together as a family. Their plan worked, as he and his wife never missed one of their son's games, concerts, or school events. Ultimately, Sam and his family moved to Columbus, Ohio for work. While he may have physically been in Ohio, he never forgot his Boston roots, proudly displaying his 'BOSOX' license plate on his vehicles. In his free time Sam loved to read, listen to music, watch the Red Sox, and loved spending time with his family. To cap off a full life, Sam was ecstatic to meet his granddaughter for the first time just several days before his passing. To say that he lived a full life is an understatement. All that knew him would agree, there will never be another like him. Sam is survived by his son, Samuel E. Marcellino III (Brittany); his granddaughter, Francesca; his sister, Lora Sheptyck (David); half-brother, Thomas (Rocell) Marcellino; nieces, Eliza and Amelia; among many other loved friends and family. He is predeceased by his wife, Lynn; his parents, Samuel and Katherine; his stepmother, Vivian; and his sisters, Katherine Duggan, Donna Marcellino; and stepsister, Jan Smith. In lieu of flowers, the family suggests that contributions be made in Sam's memory to he and Lynn's favorite charity, the Mid-Ohio Food Collective, 2960 Brookham Dr., Grove City, OH 43123 (www.midohiofoodbank.org). A private memorial will be held for friends and family in the coming weeks. To share a memory or condolence, please visit www.schoedinger.com

Samuel E. Marcellino Jr., passed away on July 6, 2021, at the age of 83. Sam was born on May 31, 1938, in Boston, Massachusetts to Samuel and Katherine Marcellino. Sam was a self-described drifter, but to friends and family he was a Renaissance... View Obituary & Service Information

The family of Samuel E. Marcellino Jr. created this Life Tributes page to make it easy to share your memories.